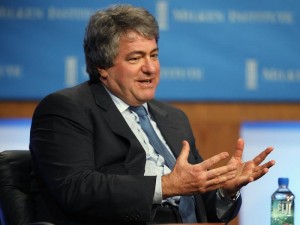 Josh Harris, senior managing director at Apollo, said on the firm’s fourth quarter earnings call Thursday the Oppenheimer relationship marks the firm’s first sub-advisory role with a 40-Act mutual fund. He was referring to a mutual fund that adheres to the Investment Company Act of 1940, legislation that requires oversight by the Securities and Exchange Commission. The law lays out requirements such as public filings, disclosures and fiduciary duties for fund companies.

“We believe this type of opportunity is scalable, given our expertise and differentiated product offerings,” Harris said, adding that Apollo would disclose more details around its retail efforts in coming quarters.

Shareholders at Oppenheimer Global Strategic Income Fund will vote on whether to approve a new investment agreement between Oppenheimer Funds Inc and Apollo Credit Management (ACM). The board of the fund approved the relationship on Jan. 22, according to a filing. A proxy statement is expected to be distributed to shareholders with an anticipated shareholder meeting date of May 1.

Since Oppenheimer Funds Inc. is the sub-adviser for the Oppenheimer family of funds, Apollo would technically be a sub-sub advisor, according to a filing.

Oppenheimer Global Strategic Income Fund trades under the symbol OPSIX. It offers a 4.6 percent yield, with a 4.75 percent front-load fee and a minimum investment of $1,000, according to a chart for the fund on MarketWatch.com. So far this year, the fund is in the second quartile, with a year-to-date return of 1.4 percent, according to Lipper.

Apollo said it could offer investors in the Oppenheimer fund returns of roughly 6 percent to 10 percent via access to the high-yield credit market. Typical mutual funds offering access to the debt markets offer yields of 3 percent to 5 percent for the same amount of risk, Apollo said.

“This (new Oppenheimer offering) is clearly through a larger fund structure, and that’s one channel to get to that retail investor,” Black said. “The reality is there are other channels, and we do have similar conversations in the works.”

He said there are multiple opportunities to tap into retail investors, including through larger fund complexes such as Oppenheimer, closed-end funds in public markets or high net worth channels.

“The retail investor is getting wise about this and saying, ‘Why is it that endowments should be allocated 30 percent to alternatives? Why is it that sovereign wealth funds and state pension funds should be allocated 10 percent to 15 percent to alternatives, and why am I only allocated 1 percent? And so how do I get part of this?’” Black said. “And so you’re going to see this being a leg of growth in credit across multiple channels. Clearly, income is what retail investors want.”

Other large private equity firms have been exploring opportunities with retail investors. Blackstone Group on Jan 29 said it raised about $500 million last year for a new offering aimed at wealthy individuals called BX Total Alternative Solutions (BTAS). It is open to accredited investors and marketed through two ultra high-high net worth distribution systems.