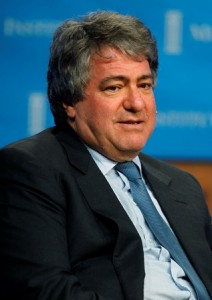 ”Despite an environment in which valuations generally remain quite high, our investment teams continue to utilize the various pathways we have created to deploy capital,” Leon Black, Apollo CEO and chairman, said on the firm’s second-quarter conference call.

Apollo said it has been targeting “attractive value-oriented investment opportunities,” with investment multiples for Apollo Investment Fund VIII running in the neighborhood of 6.5x EBITDA to 10x EBITDA. By contrast, the average purchase price multiple for U.S. buyouts rose to 9.94x EBITDA in the second quarter, from 9.28x EBITDA in the  year-ago period, according to S&P Capital IQ.

Apollo Investment Fund VIII wrapped up in 2013 as the firm’s main buyout pool. It’s still less than 24 months into its six-year investment period and it’s invested or committed nearly one-third of its capital in targets that “we believe will generate meaningful long-term value,” Black said.

Apollo’s various funds deployed about $2.9 billion in the second quarter, including $1.4 billion by its credit platform; $624 million by its real estate investments and $900 million by its private equity business.

Across its credit, private equity and real estate funds, Apollo said it generated inflows of $3.2 billion during the quarter.

Apollo said it won commitments of $520 million for the final closing of its Apollo Energy Opportunity Fund to bring the total to $1 billion-plus, ahead of a $750 million target listed for the fund in a Form D filing.

Apollo drew in $1 billion from the Teachers’ Retirement System of Texas, bringing the total account size with the public LP to $4 billion. Apollo also manages a separate $1 billion from TRS for credit investments, with more than half of that expected to close in the third quarter.

Black said Apollo is approaching a first close for Apollo Natural Resources Partners II, but did not provide a dollar figure for the amount raised.

Apollo’s private equity funds grew in value by 2.7 percent during the second quarter.