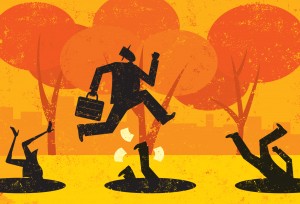 “We have built an aviation business; we have built an oil and gas business,” Hunt said at the JMP Securities Financial Services and Real Estate Conference. The Apollo BDC, launched by Apollo Global Management, had invested about $400 million in energy, providing financing to small, under- capitalized oil companies with proven deposits. “We think it’s a good area,” said Hunt, who had previously worked as CFO at Yankee Candle. “It is getting a little frothy, so we are not going to chase deals.”

The comments came shortly before the steepest slide in oil prices in years. From the $90-plus level last fall, crude prices dropped to below $44 a barrel in March. Since then, the price has held in the low $50 range, squashing returns in the U.S. oil patch for BDCs and other players.

“The outlook revision for Apollo is driven by the firm’s outsized exposure to oil and gas, aircraft financing and structured investments,” Neenan said in a note to clients. The roughly 14 percent share of its oil and gas investments ranks “at the high end of the peer group,” Neenan said.

The weakness in the oil and gas industry marked another tough spot for Apollo Investment Corp, a business that lags many of its competitors in valuation. As of July 21, Apollo’s BDC stock traded 18 percent below the net asset value of its holdings (see accompanying chart). It’s tied with Solar Capital in the ninth place slot out of a pool of 14 select BDCs, most of which are followed by Fitch Ratings.

BDCs that trade at a discount to NAV can’t raise fresh capital by issuing more stock without first getting shareholder approval.

Still, Apollo Investment Corp isn’t without its merits, according to at least one analyst.

Keefe, Bruyette & Woods analyst Greg Mason reiterated an outperform rating on Apollo Investment Corp after its fourth-quarter earnings update in May. He acknowledged concerns over negative valuations in its portfolio, which have pressured book value, but he concluded the stock remains attractive.

“With a 10.4 percent dividend, which we have confidence in, an 11.4 percent potential earnings yield…[and] a price to book that is a discount to the group even after negative marks this quarter, we believe the valuation is compelling,” Mason wrote in a note to clients.

A spokesman for Apollo Investment Corp did not comment for this story.

Apollo Investment Corp plans to continue efforts to deploy capital and monetize investments to improve its returns, CEO Jim Zelter said on the firm’s fourth-quarter conference call in May. It will also move to monetize non-yielding positions and use the proceeds for income-producing assets.

“We are optimistic regarding the opportunities for providers of flexible capital such as ourselves, particularly as new bank regulations impact lending by banks,” he said. “We believe the collective scale of our platform enables us to participate and yet be selective in the marketplace today.”

Similar to venture capital funds or growth equity funds, BDCs invest money in relatively small businesses. Unlike those pools, however, BDCs must register under Section 54 of the Investment Company Act of 1940 to qualify.

BDCs are required by law to pay out 90 percent of their earnings as dividends. They give public market shareholders access to private equity-type investments. For big private equity firms, managing BDCs provides a way to diversify and grow assets under management.

As an industry BDCs have faced their share of challenges. In 2014, S&P Dow Jones Indices removed BDCs from its U.S. Indices “after consulting with clients concerned with certain reporting requirements, expenses and investment restrictions,” according to a statement from the firm. This led to lower trading volume for many BDCs.

More recently, the share prices of many BDC lag NAVs. “Equity price discounts have been driven by a combination of concerns about the sustainability of current dividend levels, energy exposures, asset quality, off-balance sheet leverage, external manager conflicts, and share illiquidity following index removals in first-half 2014,” Fitch said May 29 of Apollo Investment Corp and other BDCs that have struggled.

The industry is searching for ways to battle back. The Small Business Investor Alliance, for example, is promoting a measure in Congress to raise the allowable debt-to-equity leverage of BDCs to two to one from one to one, a move that could improve returns. See related story.

Brett Palmer, president of the Small Business Investor Alliance, said the group also is pushing for the SEC to reopen the comment period on a set of rules called Acquired Fund Fee & Expenses (AFFE). The rules went into effect with little or no input from BDCs and likely contributed to their being delisted by S&P Indices last year, he said.

Palmer said he believes the BDC sector overall remains healthy as it takes up the lending slack in the middle market once occupied by big commercial institutions.