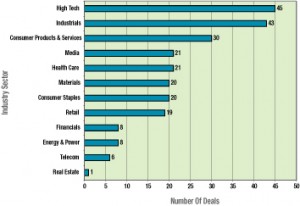 As for number of deals, the 252 control-stake deals that closed in the quarter was off more than 15 percent from last quarter’s total of 302 deals, which stands as the busiest ever in terms of closed deals, according to Thomson Financial and Buyouts. The number of closed deals is nearly even with the total from the third quarter of 2006 (259).

Through three quarters, LBO firms have consummated 837 deals, and those with disclosed values totaled $304 billion, according to Thomson Financial and Buyouts. At the same point last year, the deal total reached 770 while the disclosed volume climbed to $181 billion. The fourth quarter of 2006 still stands as the most prolific three months in LBO history, although 2007 is on pace to set a new annual record despite the relative inactivity in the large end of the market over the last three months.

As expected, mega-deals led the way in the third quarter.

. topped them all, finally shutting the books on deals that were announced as long as ago as December 2006. The firm completed its $27 billion take-private of First Data Corp.; the $9 billion LBO of Biomet along with ; the $7.1 billion joint deal for U.S. Foodservice with ; the $7 billion delisting of Dollar General Store; and the $3.7 billion deal for Laureate Education.

It was a much different quarter for The . The New York firm flew solo on just four completed deals, and the only one that wasn’t an add-on or a secondary transaction was the $200 million buyout of a Mumbai, India-based outsourcing firm. Blackstone Group President Tony James recently said his firm missed out on a lot of deals because it wasn’t willing to match the high offering prices of competitors. The third quarter offers definitive proof.

, known for its taste for troubled companies, notched a single closed deal in the third quarter, a $60 million add-on, according to our count. The firm closed three big-ticket deals in the second quarter.

Other notable mega-deals that closed included the $7 billion carve-out of Chrysler by and the $5 billion delisting of ServiceMaster Inc. by Clayton, Dubilier & Rice. Both of those deals, and many more like them, closed even though lenders were stuck with billions of dollars of debt commitments and few willing buyers. No deal even approaching the size of those LBOs has been announced since Blackstone Group agreed to buy Hilton Hotels for $26 billion in early July.

Only 17 of the 252 deals closed in the third quarter carried price tags above $1 billion, suggesting that the middle market continued to provide the vast majority of the industry’s deal flow. Indeed, it’s likely that most of the 180 of the 252 closed deals that carried no disclosed value were mid-market and lower-middle-market deals.

Despite the strong third-quarter numbers, the pace of fresh deal-making eroded quickly as the summer dragged on. While banks choked on clogged paper, financial sponsors globally announced just 14 deals in August and September with disclosed values greater than $1 billion, according to Thomson Financial.

Sponsors accounted for 13 percent of announced mergers-and-acquisitions activity during the last two months, the lowest levels so far this year and a far cry from, say, May, when U.S.-based general partners hogged 30 percent of all M&A activity, according to Thomson Financial.

The debt market has begun to rebound somewhat, helped by banks willing to take haircuts on their debt in order to move the paper and buyers who’ve raised funds specifically to invest in discounted securities. But it still remains difficult to assemble a debt package of $1 billion or more, and middle-market creditors are typically willing to lend a turn less in leverage than they were six months ago.

“The confidence level in the market has dwindled quite a bit,” said Rick Chance, managing director of KPMG Corporate Finance and head of the firm’s special situations advisory group. “Lenders are tightening up their due diligence to minimize their exposure.”

Given how quickly market sentiment has shifted, the most optimistic players are those that thrive in difficult conditions. Turnaround firms, distressed merchants and operational gurus have been waiting for years for economic conditions to deteriorate, and many are now sensing that their time has arrived.

“A lot of people don’t want to write the $10 million equity check for the headache that will come with the [distressed] deal,” said Bassem Mansour, managing partner of Cleveland-based turnaround firm . “We like it. We’ll do it all day long.”

The lower middle-market firm closed five deals in the last year but is on pace to consummate just as many in the fourth quarter of 2007 alone. Similarly, long-time turnaround investor Angus Littlejohn did one deal in 2006 before coming back to life in the third quarter of 2007, closing three deals.

To be sure, the three deals completed by his Connecticut-based firm, ., were special situations independent of market cyclicality. But Littlejohn is clearly looking to the coming year as a grand opportunity for his shop, which includes a distressed-securities trading desk.

In the last year, those traders have been quiet, Littlejohn said. But he predicted that they would soon grow busy because LBO firms will no longer be able to punt their portfolio problems down the pike through cushy debt refinancings.

“The last couple of years we have seen companies that, operationally, weren’t performing at the levels that they should and definitely not performing relative to the debt commitments they had. Normally, that would convert to investments for us,” Littlejohn said. “But with the market having been so liquid, they were able to refinance the problem debt in many instances with cheaper and better covenants. That’s gone—just plain old gone.”

Meantime, despite recent gains in the public equities market, the economy is showing signs of a slowdown as oil prices rise and home prices plummet, Chance said. Consumer spending could fall at the same moment that $1.5 trillion worth of adjustable-rate home mortgages become due to be reset higher, Chance said. Companies of virtually any stripe will face difficulty staying afloat if the economy stalls.

With macroeconomic headwinds begin to blow and easy credit off the table, it’s fair to expect the default rate to beginning climbing from its historic lows. This is the moment a certain breed of buyout pro has been waiting for.

“We’re now starting to hear of companies who have actually busted covenants or are expected to bust covenants,” Littlejohn said. “We’ll see how that works out. I would say we’re going to get busy.”