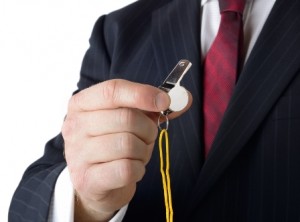 After all, TPG Capital manages $67 billion as one of the largest private equity firms in the world. Levine is, well, just one man.

But Levine holds at least one possible ace: Jordan Thomas, the lead attorney for Levine, joined law firm Labaton Sucharow after working at the SEC, where he helped craft the regulatory agency’s whistleblower program. Thomas also represented another self-described whistleblower in a case against a hedge fund in which the fund settled with the SEC for more than $2 million.

Levine’s case appears to be one of the first against a big private equity firm that invokes anti-retaliatory language in the whistleblower provisions in the landmark 2010 Dodd-Frank legislation. His lawsuit, filed April 2 in U.S. District Court in the Northern District of California, alleges TPG violated the federal and state whistleblower laws and other rules when it fired him last December.

The suit claims Levine’s conduct was covered by Dodd-Frank’s whistleblower provision, which includes the language: “No employer may discharge, demote, suspend, threaten, harass, directly or indirectly, or in any other manner discriminate against, a whistle-blower in the terms and conditions of employment because of any lawful act done by the whistleblower.”

Levine is seeking actual damages of $739,000, including vested non-cash compensation, in addition to punitive damages against TPG.

Specifically, the suit claims Levine acted as a whistleblower by alerting the SEC to concerns he brought up to his former bosses about TPG’s internal comments related to billing LPs and portfolio companies for expenses.

Thomas told Buyouts that TPG’s move to sue Levine after he warned the firm about alleged mishandling of how certain expenses were billed amounts to a “textbook example of how not to handle a whistleblower complaint.” Thomas declined to comment further. A spokeswoman for the SEC declined to comment.

Levine has alleged TPG executives told him to pass on the cost of expanding the firm’s public affairs department ahead of a planned IPO to TPG’s LPs and portfolio companies. When he objected to the practice as non-compliant, he was fired, the suit claims. Levine started at TPG as a consultant in 2007 and joined full-time in 2008. He previously worked at Goldman Sachs and for the George W. Bush administration.

In one of the more sensational allegations in Levine’s suit, he said the firm’s senior counsel, Clive Bode, told him he would have “gutted him like a carp” if he had sent him an email that contained warnings about the firm’s activities.

TPG outside counsel Marc Kasowitz said in an email to Buyouts that Levine’s allegations are “patently false and defamatory” and that he tried to extort millions of dollars from the firm by threatening a media smear campaign. Levine’s lawsuit amounts to a “meritless pleading designed to distract attention from Mr. Levine’s own egregious and illegal misconduct,” Kasowitz said.

TPG sued Levine on Jan. 28 in U.S. District Court in Fort Worth, Texas, claiming he stole confidential material after he was fired on Dec. 31. The suit alleges that Levine, TPG’s former managing director of global affairs, was fired for making an escalating series of threats against the firm.

TPG has said it took legal action after learning that a reporter at The New York Times had allegedly received confidential TPG emails from Levine.

Since the whistleblower provision was included in Dodd-Frank, only one other settlement has been publicized by the SEC in terms of illegal action against a whistleblower. Last June, the SEC exercised its anti-retaliation authority for the first time under the provisions of Dodd-Frank against hedge fund Paradigm Capital Management.

The owner of the firm conducted transactions between Paradigm and a broker dealer that the person also owned, while trading on behalf of a client, the SEC said. These types of trades present conflicts of interest between the adviser and the client and should be disclosed to the client to gain their consent, the SEC said. After Paradigm found out its head trader had reported the potential misconduct to the SEC, Paradigm took retaliatory actions that resulted in the employee’s resignation, the SEC said.

In settling the case for $2.2 million, Paradigm neither admitted nor denied the SEC’s findings. “We are pleased to resolve this matter and have it behind us,” a spokesman for the firm said in a media report last year.

Thomas, who is representing Levine, represented the whistleblower in the Paradigm case. Under the SEC’s whistleblower guidelines, the head trader at Paradigm who reported the problem could be awarded between $220,000 and $660,000.

The legal dispute comes as TPG continues fundraising for TPG Partners VII, its latest flagship fund. It has raised at least $6.5 billion out of a targeted $10 billion, Buyouts has reported.

The noise around the Levine litigation could present a hurdle during fundraising, but TPG will likely work with its investors to agree on clear language on fees in its limited partner agreements, said a placement firm executive familiar with the firm.

“It may slow things down a bit, but it won’t cause anybody to step out of the TPG platform,” the executive said.