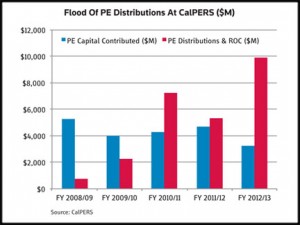 CalPERS does not make its plans public, but the documents show that for the first time since the financial crisis CalPERS’s private equity program has fallen below its 14 percent allocation target. The $31.4 billion program fell to 12.2 percent of all assets as of June of this year, compared with 14.6 percent in June of 2012.

In addition, the program has not just become smaller in proportion to CalPERS’s overall portfolio, which is growing, but it has actually shrunk in absolute terms. As of June 30, the $31.4 billion that CalPERS had invested in private equity had dropped nine percent from $34.4 billion in June 2011. As of June of 2013, the program is $4.7 billion below its allocation target.

The one-year disparity is even more stark (see accompanying chart). CalPERS received $9.9 billion in distributions in fiscal 2013, which ended on June 30, compared to just $3.2 billion in new investments, a difference of more than three-to-one.

To be sure, dry powder is a wild card. As of June 2013, CalPERS had $12.4 billion in unfunded commitments, about $1.1 billion more than the previous year. Such money could quickly be drawn down by GPs to make new investments, and if that were to happen, new investments could rapidly catch up to distributions. That said, such drawdowns would reduce the amount of ammunition that GPs would be able to use in future years.

So, why have new investments so dramatically lagged behind distributions? It may be CalPERS has been reluctant to make new commitments during the year-long hiatus between the previous private equity chief, Leon Shahinian, who was put on administrative leave in May 2010 after being named (but not as a defendant) in a civil case about CalPERS’s pay-to-play scandal, and Réal Desrochers, the new PE chief, who started in June 2011. But that does not explain why commitments under Desrochers have not picked up steam in the two years since he joined CalPERS. New commitments by CalPERS were just $700 million in calendar 2010, $1.9 billion in 2011 and $2 billion in 2012, all amounts that were far below the pace of distributions.

Another possibility is that under Desrochers, CalPERS has bargained harder for special deals than ever before. In these negotiations, one can imagine long-time GPs either walking away or indicating that they are not interested in the terms that CalPERS has been demanding. Leonard Green & Partners, for example, reportedly rejected terms that CalPERS proposed for its latest fund, effectively putting their long-established relationship on ice.

In an email to Buyouts, Desrochers didn’t get into details on the question of distributions but emphasized that his program’s focus is on prudence and patience. “We will continue to be thoughtful and prudent investors. We want the right investments for our portfolio and aren’t going to chase targets.”

In addition, Desrochers urged caution in light of CalPERS’s strategic asset allocation review, due out later this year. “We will wait for the outcome of the board’s review of our strategic asset allocation and chart a course for the future of the program at that time,” he said. The review is done once every three years. A CalPERS spokesman declined to offer any predictions about possible changes to the pension’s allocation targets.

Whatever the outcome, one thing is clear. CalPERS must sharply boost its private equity program soon, or it will fall further below its current 14 percent private equity target due to the asset’s natural flow of distributions.