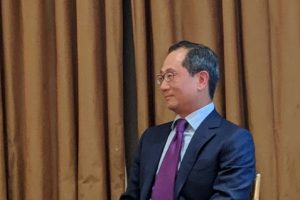 Carlyle Group, which planned for an ambitious $20 billion fundraising campaign for 2020, expects activity to slow down in the latter half of the year, the firm’s newly-minted sole CEO Kewsong Lee said during the firm’s second-quarter earnings call.

The firm has brought in about $12.4 billion of inflows so far this year, which Carlyle officials described as strong, especially in the absence of a major flagship fund on the market. Going forward, the firm expects fundraising to slow, which could cause it to come under its $20 billion fundraising goal for the year, according to Lee and CFO Curt Buser.

Carlyle reported about $73 billion in uncalled capital. The firm expects annual fundraising to come in around the high teens each year in the absence of large flagship funds, Buser said on the call.

“All of this is interrelated to pace of deployment and of exits,” Lee said. “To the extent that gets pushed out a little bit, it shouldn’t be a surprise that fundraising would similarly get pushed out.”

The firm’s focus now is on supporting the portfolio where needed and seizing on opportunities that crop up in the downturn environment, Lee said. “As pace picks up and exits pick up, you’ll start hearing from us much more about the next cycle of fundraising.”

Carlyle’s former co-CEO Glenn Youngkin said during the firm’s fourth-quarter earnings call in February that the goal was to boost fundraising by 20 to 30 percent this year. The firm announced earlier this month that Youngkin was retiring and Lee would take over as sole CEO.

One major fund Carlyle has in market is its seventh secondary fund from its Investment Solutions business. AlpInvest Secondaries Program VII is targeting $8 billion, sister publication Secondaries Investor reported in November. Fund VII has collected about €4.3 billion as of June 30, Carlyle reported.

Much of that activity stemmed from firms that were already in the market before the pandemic hit, meaning potential LPs may have already completed due diligence on the opportunities and had an easier time deciding whether to commit.

The pace of fundraising could slow in the back half of 2020 because managers may be reluctant to bring funds to market, especially in an environment where LPs are unable to perform onsite assessments.

LPs are still looking to build exposure to alternative investments – a situation that will likely continue as long as interest rates remain low, Lee said.

“There’s no better way for our LPs to meet the needs of their investment objectives than…to allocate and continue their investments into alternatives,” he said. “From a longer-term perspective, the current economic environment and current outlook is such that it further supports and reinforces the tailwinds our asset class has.”