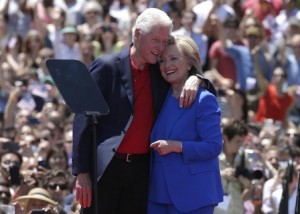 Hillary Clinton, who officially announced her campaign in April, earned $280,000 for a speech she gave to Chicago-based private equity firm GTCR last June, according to documents filed with Federal Elections Commission. Bill Clinton charged Apollo Global Management, The Silverfern Group and Veritas Capital $250,000 each for appearances in 2014 and 2015, the documents show.

Sources briefed on the appearances characterized them as speaking events, though they declined to elaborate on what was said. Last year, a Veritas executive told Fox Business that Bill discussed “the usual stuff,” which at the time meant West Africa’s Ebola crisis and terrorism, among other topics.

“It was a private meeting and I can’t really speak on it,” said Alexandra LaManna of Sard Verbinnen, which handles media relations for Veritas.

Presidential candidates are required to provide information about their financial holdings, debt and other sources of income. Since leaving public office, the Clintons have earned millions on the public speaking circuit, typically charging several hundred thousand dollars per appearance. Hillary Clinton’s disclosure details payments ranging from $100,000 to $500,000.

The Clinton’s spoke at events hosted by several Wall Street firms and banks, as well as industry groups and corporations during the last year and a half. Hillary Clinton was paid almost $12 million for 51 appearances during that span, while her husband received $13.46 million from 53 appearances throughout the same period.

Bill Clinton’s highest-earning appearances were at a pair of events hosted by Bank of America and law firm Kessler Topaz Meltzer & Check in Europe last year. The former president earned $500,000 for each of those appearances.

The former U.S. Senator and onetime Secretary of State received $335,000 for delivering an hour-long keynote at a Biotechnology Industry Organization conference in San Diego last June, and she received the same amount for speaking at an event hosted by Qualcomm.

The Clinton family has extensive ties to the private equity industry. After the White House, Bill Clinton held a position at The Yucaipa Companies from 2002 to 2009. The couple’s daughter, Chelsea Clinton, worked for hedge fund and private equity firm Avenue Capital from 2006 to 2009, and Avenue co-founder Marc Lasry is reportedly raising money for Hillary Clinton’s presidential campaign.

The former president and first lady spoke at events hosted by private equity firms prior to the 2014-2015 period covered by the disclosure. Hillary Clinton spoke at investor meetings hosted by The Carlyle Group and Kohlberg Kravis Roberts & Co in 2013. Bill also participated in a question-and-answer session at Carlyle’s 2012 investor meeting.

Despite the Clinton’s recent appearances at events hosted private equity firms, as well as hedge funds and banks such as Citadel and UBS Wealth Management, Hillary Clinton has made comments on the campaign trail that suggest she may take stances that would rankle those in the financial world’s upper echelon.

“There is something wrong when hedge fund managers pay lower tax rates than nurses or the truckers that I saw on I-80 as I was driving here over the last two days,” Clinton said at an Iowa event in April. “I want to stand up and fight for people so they can not just get by, but they can get ahead and stay ahead.”

Those comments echoed Clinton’s stance on the tax treatment of carried interest during her previous campaign for presidency in 2007 and 2008. At the time, Clinton said it “offends our values as a nation when an investment manager making $50 million can pay a lower tax rate on her earned income than a teacher making $50,000 pays on her income,” The New York Times reported.

A spokesman for the Clinton campaign did not respond to a request for comment.