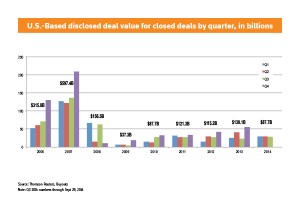 U.S. sponsors maintained a robust pace of deal-making but closed fewer acquisitions in the third quarter compared to the year-ago period. A run-up in public stock prices discouraged take-privates in the face of more aggressive strategic buyers, despite favorable credit markets and a recovering economy.

Buyout shops successfully turned to carve-outs to source deals and maintained a healthy diet of secondary transactions amid an uptick of overseas transactions. The middle market remained in favor, with only four closed LBOs breaking the $1 billion barrier during the period.

In total, U.S. sponsors closed 370 control-stake deals between July 1 and September 29, down from 421 in the full year-ago quarter, according to Thomson Reuters data. The pace also fell from the 412 deals in the full second quarter of this year. To be sure, the latest quarter’s deal count didn’t include the last day of the period, often a busy day for closings. So the final deal count for the third quarter of 2014 may be closer to the year-ago figure.

Buyout pros cited a number of reasons for the slowdown in overall deal count, including higher bids by cash-rich corporations looking to find growth and fewer-than-expected assets for sale by conglomerates. Despite these challenges, which may have contributed to higher purchase price multiples during the quarter, sponsors turned in a strong quarter of merger and acquisition activity, especially when including announced-but-not-closed deals.

Deal volume by U.S. sponsors, based on disclosed values of acquisitions, rose to $28.6 billion between July 1 and September 29, up from $23.7 billion for the full year-ago quarter and in line with the $29.1 billion in the second quarter. The latest figure marks the highest third-quarter dollar total by U.S. sponsors since 2008’s third quarter, which totaled $62.7 billion.

Signaling a strong final quarter of the year, the number of announced-but-not-yet-closed and closed deals in the third quarter rose to 466, up from 441 both in the year-ago quarter and the second quarter.

Boosting the dollar volume for the balance of 2014 is the announced $11.5 billion deal by 3G Capital Management and Warren Buffett’s Berkshire Hathaway to buy Tim Hortons Inc as an add-on for Burger King. It’s the largest private equity-backed buyout so far this year.

“Leverage levels, although they have increased over the last several years, appear to be range-bound and are starting to cap out with equity contributions still averaging a third of the deal or more,” said Bill Sanders, managing director and global head of the financial sponsors group at Morgan Stanley.

Among acquisition types, only 2 percent of closed deals fell into the take-privates category in the third quarter, or a total of six transactions. Carve-outs amounted to 22 percent of closed deals and secondaries comprised 18 percent. A year-ago, about 5 percent of deals were take-privates, with only 2 percent carve-outs and 13 percent secondaries, according to a Buyouts survey. Sponsors closed 110 deals from outside the United States, up from 95 in the year-ago quarter. These figures reflect an ongoing trend of standalone buyouts comprising the majority of M&A activity.

While lofty purchase price multiples sometimes draw comparisons to the 2007 boom, sponsors continue to avoid any mega-buyouts of that that era, for a variety of reasons, although they do remain an option.

Blackstone Group’s $5.4 billion buyout of industrial firm Gates Global ranked as the largest deal to close during the quarter in terms of disclosed dollar volume

Tony James, Blackstone’s president and chief operating officer, recently said the firm is studying potential deals in the $20 billion to $40 billion range, but said there’s no guarantee of any.

“Club deals are actually perfectly OK…but none of us wants to do a deal with our competitors,” he said Sept 18 at the LP-GP Summit conference sponsored by Thomson Reuters, until this month the publisher of Buyouts (now owned by UCG). “It’s a little bit of an unnatural act when you’re trying to cut somebody’s throat on another deal.”

Instead of teaming up with a rival buyout firm, Blackstone Group would be more likely to tap into its roster of LPs for co-investments, he said.

Another damper on large deals has been a lack of big corporate assets on the selling block, said John Eydenberg, global head of financial sponsors coverage at Deutsche Bank.

“When take-privates have happened, there’s usually a catalyst like a change in management or maybe an activist investor,” Eydenberg told Buyouts. “There are plenty of companies where LBO math works but going private is not in the cards. The main reason is boards have given the benefit of the doubt to management teams to do self-help programs.”

Two years ago, he expected the LBO business would benefit from a surge in big cap corporates divesting non-core assets, but that hasn’t taken place.

Said Eydenberg: “While there have been a few deals of size, companies have chosen to hold their cash cows because they have fortress balance sheets and few places to invest the cash. There’s been an increase in strategic acquisition activity this year but there’s still a lot of corporates sitting on businesses that are non-core and could garner attractive valuations.”

The Hunt For Carve-outs, Secondaries

Even though big corporates may not be selling as many subsidiaries, buyout shops continue to see some success in innovative deals to break out assets from larger companies.

“There has been healthy carve-out activity recently, but the challenge is identifying them early on and having an angle or competitive advantage over other firms such as an existing relationship with the parent company or having a manager already lined up for the asset,” said Morgan Stanley’s Sanders.

As one of the most active U.S. sponsors in the quarter, GTCR closed seven deals, including the $480 million acquisition of Cole-Parmer Instrument Co. as a carve-out from Thermo Fisher Scientific, one of the first deals to tap GTCR Fund XI, which closed on $3.85 billion in January.

GTCR crafted the Cole-Parmer deal by working over time with industry executive Bernd Brust, former CEO of Qualicaps and now the CEO of Cole-Parmer.

“He and his team were really instrumental in helping us put the business plan around carving out this business,” said Craig Bondy, partner at GTCR. “Having that managerial talent to bring to complicated situations to create a new business – it’s very complementary…. We’re trying to be very creative. We’re trying to find situations with a management partnership, or an asset we already own, that puts us in a differentiated position to evaluate that opportunity. That’s the key to how we’re thinking about what we’ve done recently.”

Along with carve-outs, secondary deals remain a popular source of deals. GPs said the stigma of buying from another private equity firm is starting to fade. One deal-maker pointed out that as the asset class matures, it owns more companies, so it’s harder than ever to avoid sponsor-owned targets.

“If one group does well, there can still be a very good track record for the next buyer,” said Todd Morris, managing director of Harris Williams, the middle-market investment bank. “It goes back to having a strong growth story and if the story checks out, a lot of private equity groups are comfortable with secondary deals.”

Among its closed deals for the quarter, Arsenal Capital Partners platform company TractManager, a provider of compliance and contract management services for healthcare organizations, purchased the business of MD Buyline, a portfolio company of SFW Capital Partners, in a secondary transaction.

“Regarding the source of the original platform or add-on, we don’t at all distinguish between who owned it, whether it’s an entrepreneur-owned enterprise, whether they’ve had their first private equity money, or if it’s part of a company,” said Terry Mullen, partner at Arsenal Capital. “We look exclusively at the market strategy…(and at) what’s the problem we’re solving and how a certain company and their capabilities enable that solution.”

“LPs are very interested and receptive to transformative strategies and high-growth strategies,” Mullen said. “If you’re taking an asset and have a strategy to take the platform to a new position or new market, then they’re excited about that.”

Middle-market firm Swander Pace Capital didn’t close any deals in the quarter after buying Recochem Inc and other firms earlier this year, but Andrew Richards, managing director, said he expects to stick to the firm’s pace of two to four acquisitions a year despite high prices. The firm courts family-owned companies over time to eventually put a deal together.

“You try to maintain discipline on your pricing,” Richards said. “The deals we run at harder and where you may be able to stretch on pricing are where you have an edge because the company may be in a category where we’ve been before. So we may be able to grow the business more quickly than they’ve been able to achieve.”

Swander Pace finds deals by scouring niche categories in over-the-counter drugs, food and other consumer products. In April, Swander Pace closed SPC Partners V with $350 million in commitments, ahead of the $342 million raised in the predecessor fund, the vintage 2008 SPC Partners IV.

“Our focus really is working with families and entrepreneurs going through change in ownership or other transitions,” Richards said.

Looking ahead, Sean Eagle and Eugene Krichevsky, partners at American Capital Equity Management LLC, said despite some sourcing challenges facing sponsors, they expect to close one or two deals over the next 12 months after the firm raised $1.1 billion for American Capital Equity III LP, a private equity pool aimed at lower mid-market investments.

“Our investment period is just starting and we can be patient,” Krichevsky said. “We’re typically buying high quality businesses in sectors we’ve targeted, where there’s less of a variation in multiples between boom time and trough times. These types of companies have always commanded premium valuations with a little less of volatility in valuations—and earnings—than other sectors.”