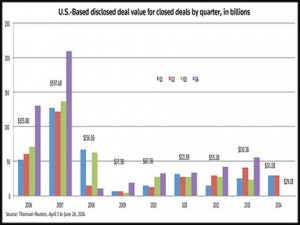 Platform deals outnumbered add-ons, suggesting growing confidence in the future and bulging war chests. Still, the industry continued to cede the large end of the market to strategics, with only six closed acquisitions surpassing the $1 billion mark during the quarter.

In total, U.S. sponsors closed 343 control-stake deals between April 1 and June 26, up from 309 in the full year-ago quarter, but down from 419 in the first quarter, according to Thomson Reuters data.

Deal volume by U.S. sponsors, based on disclosed deal values, dropped to $29.1 billion in the second quarter through June 26, down from $41 billion in the year-ago quarter, which included the blockbuster take-private of H.J. Heinz Co by 3G Capital Partners and Berkshire Hathaway for $27.4 billion. Minus that single blockbuster, deal volume would have increased from the year-ago quarter. The latest quarter’s total nearly held pace with the first-quarter deal volume of just under $30 billion.

In the first half of 2014, U.S.-sponsored-backed closed deals totaled $59.1 billion, less than the year-ago first half total of just under $67 billion.

Average purchase price multiples climbed to 9.6x EBITDA for all U.S. sponsored deals in the second quarter, up from 7.8x EBITDA in the year-ago quarter, according to S&P Capital IQ. That is the priciest the market has been since 2007. In a sign of some restraint, however, debt-to-EBITDA levels rose less sharply, to 5.7x from 5.3x.

Looking just at the middle market, Howard Lanser, managing director at Robert W. Baird, said purchase price multiples for deals under $1 billion held near 8.4x EBITDA for much of the quarter, outside of some pockets of loftier multiples.

“The market feels like it’s priced to perfection,” he said. “Any kind of prolonged or unexpected headline risk is going to rattle the market and it’ll rattle all markets equally and simultaneously—equity, debt, and M&A—which would quickly chill the market environment we are now in.”

Peter Lyon, co-head of the financial sponsors group at Goldman Sachs, said sponsors are keeping an eye out for a sudden drop in valuations, which would hurt returns on investments already made. But for now, GDP growth and recovering economies among Western democracies remains cause for optimism.

“You have to look at the credit and equity markets and say there’s probably a correction or two coming,” Lyon said. “Sponsors see the obvious. There have been hints here and there but generally there’s been a lack of volatility globally…It feels pretty robust to me.”

Audax Group LP topped the list of the most active LBO deal makers in the second quarter with 11 transactions, followed by nine each for Blackstone Group LP, GTCR LLC and TPG Capital. Among its platform purchases for the quarter, Audax Group paid undisclosed sums for Luminator Technology Group LLC, a provider of electronics, as well as Miratech LLC, a chemicals firm.

Jay Jester, managing director of Audax Group, said the firm has found fertile ground targeting platform companies generating under $20 million of EBITDA, a market that he described as less competitive than the one for companies generating $20 million to $50 million in EBITDA. The firm continues to invest out of its vintage 2012 Audax Private Equity Fund IV LP, which raised $1.25 billion.

“Starting with lower-mid-market platform companies, backing great management teams and then building those deals up through add-on acquisitions is really what’s driving the Audax engine these days,” Jester said. “While the multiples are pretty crazy for larger deals, the lower mid market is healthy but it’s not quite as aggressive as it is in the mid market.”

Seeking deals outside the auction process remains a big priority, when possible.

Bain Capital paid a reported $230 million for a controlling investment in Viewpoint Construction, an enterprise resource planning (ERP) software company serving the construction industry. Bain Capital first heard about the deal through an investment bank shopping for prospective pre-IPO investors in the company. Bain Capital, which closed on $7.5 billion for Bain Capital Fund XI at the beginning 2014, convinced Viewpoint to sell a majority stake to them instead.

In some cases, sponsors are looking overseas for better pricing on deals.

Francisco Partners paid an undisclosed price for Health Robotics Srl, a manufacturer of laboratory robotic equipment based in Bolzano, Italy. The company is an add-on for Aesynt Inc, formerly a division of McKesson, purchased in 2013, and a specialist in laboratory equipment.

“Sometimes, you can get better values if you leave Silicon Valley. Technology is certainly global,” Dipanjan “DJ” Deb, managing partner of the firm, wrote in an email to Buyouts. “It was very accretive for Aesynt. It allowed us to sell intravenous products through the same distribution channel in hospitals and is a very fast growing market.” Francisco Partners closed on $2 billion for its vintage 2011 Francisco Partners III fund.

HGGC’s $725 million carve-out of the aftermarket service business of Jabil Circuit Inc as an add-on for iQor Holdings Inc ranked as a top ten deal in the quarter. The firm also closed a platform deal from its latest fund, HGGC Fund II, paying an undisclosed sum for AutoAlert Inc, a provider of enhanced sales efforts and sales opportunities solutions.

Rich Lawson, CEO of HGGC, said the firm has been able to win deals partly by going after family-owned and entrepreneur-owned companies looking to retain a minority stake after the buyout, and to expand globally.

“Where you have businesses that are profitable, willing to reinvest, with enterprise values in the $500 million range—that’s the opportunity today,” Lawson said. ”You’ll see activity If you can work with these great people. Even if the market is frothy you’ll have tremendous outcomes.”

Among  larger private equity firms, Warburg Pincus’s consumer, industrial and services group, which handles a big chunk of its U.S. LBO activity, broke a 15-month drought in acquisitions during the quarter by scooping up four deals, including Wencor Group LLC, an aerospace components manufacturer and distributor, and Electronic Funds Source LLC, a provider of corporate payment solutions. Financial terms of the deals weren’t disclosed. Warburg Pincus Is investing out of its vintage 2012 Warburg Pincus XI Partners LP fund, which raised $11.2 billion.

“In both cases we feel terrific about (what) we paid,” James Neary, managing director and co-head of Warburg Pincus’s consumer, industrial and services group said. “We dedicated a lot of time and internal resources—everything we could to be the best buyer, to be in a position where management was voting for us, where we’d break ties as the better buyer. In the end we feel very good.”

“We favor specialized managers that are either sector focused, geographically focused, or that have a specific investment style,” said Dickie. ”These kinds of funds can more easily find companies outside of broad auctions and have the expertise to take a different view on a business that leads them to buy an asset that is misunderstood or mis-priced.” He pointed to Sycamore Partners and Endeavor Capital as two firms that fit the bill for FLAG Capital because of their respective niches in the retail sector and in buying Pacific Northwest companies, respectively.

Alison Mass, co-head of the financial sponsors group at Goldman Sachs, said she expects a very busy balance of 2014 and beyond. Big corporate mergers will beget divestiture opportunities as LBO shops wait for “valuation gaps” in the marketplace, she said. LPs remain patient, with a long-term view, she said.

“It’s an amazing environment,” she said. “It’s a great time to finance everything…There’s a lot of dry powder out there and we feel very bullish about the industry and trends over the next five to seven years because things are cyclical. There will be a moment when we see big LBOs of $5 billion to $8 billion.”

CORRECTIONS: A version of this story posted on July 14, 2014, incorrectly stated the size of the $11.2 billion Warburg Pincus XI Partners LP fund. The story also had an incorrect reference to Ian Loring, who is the co-head of the technology, media and telecommunications practice at Bain Capital.