The Standard & Poor’s Weakest Links report reached new heights with 86 private-equity-backed companies combining for $151.8 billion in affected debt. While that’s only one more company since the previous quarterly report, the debt level rose by $8.9 billion, or about 6 percent.

Additionally, S&P’s defaults list continues to grow, to 34 from 26, while the bankruptcies doubled to 16. The energy sector is responsible for the majority of these: 32 of the 50 companies that have either defaulted or filed under the bankruptcy laws are energy-related. Overall, energy and power accounted for 62 — or  46 percent — of the 136 companies on the Weakest Links default and bankruptcy lists, by far outpacing all other sectors.

Claire’s Stores, the jewelry and accessory retailer, received a selective default rating on Sept. 21 after participating in a distressed exchange. Claire’s is backed by Apollo Global Management and has more than $2.7 billion in debt.

Key Energy Services was given a default rating on Sept. 8 after deferring an interest payment on its senior debt notes. The Houston oilfield-services company is sponsored by Sonostar Capital Partners and has affected debt of $990 million.

Transtar Holding picked up a default grade on July 15 when it missed the interest payment on its term loan. Transtar is a holding platform of automotive manufacturing and distribution companies. It has about $725 million in debt and is owned by American Capital.

All told, 254 sponsored and non-sponsored companies were on the list. The entire list has aggregate affected debt of about $347 billion.

To make the Weakest Links list, companies must have had speculative corporate credit ratings of B- or lower with either a negative outlook or a negative CreditWatch implication on Oct. 24. From 1981 to 2015, an average of 7.2 percent of all global entities rated B- defaulted within 12 months, and the average default rate was much higher for entities rated lower than B-. 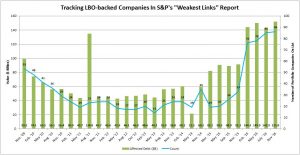