By Chris Witkowsky and Paul Centopani

Three big-name executives are in the market raising their debut fund to invest in financial-technology entrepreneurs, sources said. They join a host of emerging managers seeking to secure funding–see round-up below.

Fund I has raised at least $14.9 million, according to a Form D fundraising document filed in January.

Communitas was formed in 2017 by Doug Atkin, Tom Glocer and Duncan Niederauer.

Atkin is former chief executive of electronic-trading business Instinet Group and of Majestic Research. And he led the Guggenheim Partners venture capital business from 2010 to 2014.

Other executives include Richard Shi, partner and chief financial officer, who joined in January, according to his LinkedIn profile. Previously, Shi worked at Tiger Global Management from 2010 to 2017.

Whether Communitas has yet made an investment is unclear. Zachary Tramonti, a spokesman for Communitas, declined comment.

Read on about other budding vehicles funds currently fundraising in the private equity and venture capital marketplaces:

Nestled in the heart of downtown Washington, Brutus Capital is a nascent shop that aims its human capital toward executing analytics to achieve and sustain maximum value for businesses. Brutus’s debut fund is looking for $5 million in commitments.

ERP, or Energy Related Properties, is a private equity real estate investment firm that exclusively invests in properties where energy plays a significant role. The firm’s sophomore fund has no target listed but has collected $18.5 million thus far.

PT Capital is a PE firm with exclusive focus on investing opportunities in the emerging market of the Arctic, including Alaska, Iceland, Greenland, Finland, and Canada, especially with indigenous-owned businesses. PT’s second fund plans to raise $250 million.

Yenni Capital aims for control equity positions in profitable, growth oriented U.S. companies with minimal capex requirements in the middle market. Yenni is targeting $300 million for its maiden fund and has collected $7.2 million so far.

Civilization Ventures looks to back disruptive, cutting-edge technologies in health technology and synthetic biology. The firm’s sophomore fundraise has a $25 million end goal.

Private Equity Market at a Glance 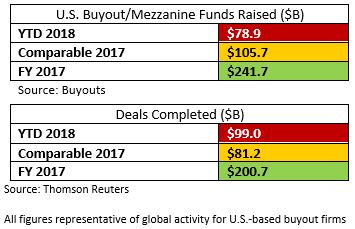