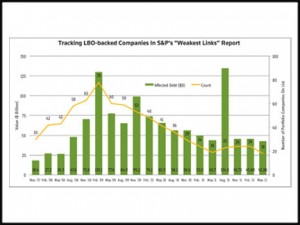 The May “weakest links” report identified 126 at-risk companies with combined debt of $196.9 billion. Inclusion in the list meant entities had speculative corporate credit rating of ‘B-’ or lower, plus a negative outlook, a CreditWatch with a negative implication or both on May 21. By comparison, S&P counted 123 entities with affected debt of $206.4 billion in its February report.

S&P cut its rating on Jacuzzi Brands Corp. in March to ‘CCC’ from ‘B-’ because it expects the Chin, Calif.-based company will face significant loan payments in the next two years. The maker of spa and bath products has revolving credit facilities maturing in February 2013. A $35 million term loan matures in November 2013 and a $170 million first-lien term loan matures in the following February.

The ratings agency, which has a negative outlook on the company, also said it expects Jacuzzi Brands’s operating performance will remain challenged because of the continued downturn in residential construction. The business is backed by both Apollo Global Management and Ares Management.

Another addition was IPS Corp., which is sponsored by Calera Capital and Polaris Venture Partners. S&P downgrades its rating on the maker of adhesives and plumbing products to ‘B-’ from ‘B’ in March due to the portfolio company’s highly leveraged financial profile. Compton, Calif.-based IPS has a $20 million revolving credit facility scheduled to mature in July 2012. It has a term loan maturing in July 2013, and subordinated notes due in June 2014, according to S&P.

Despite the downgrade, S&P said in a press release on March 28, “We expect operating performance to improve in fiscal year 2012 over 2011 levels due to increased sales to international markets as well as gradually improving domestic markets.”

Buyouts counted three portfolio companies that left the list in the March report. Another five were removed in April, then another three came out in the May report. Three were due to outlook or CreditWatch implication revision to developing and four followed a switch in outlook to stable.

In March, S&P placed Solo Cup Co.’s ’B-’ corporate credit ratings on CreditWatch with developing implication after the portfolio company agreed to be acquired by Dart Container Corp. for around $1 billion. BAML Capital Partners-backed Solo is a provider of disposable plastic, paper and foam cups and cutlery.

On April 3, S&P cut Shearer’s Foods Inc. to ’CCC+’ from ’B-’ and changed the snack maker’s outlook to developing. At that time, the ratings agency said it believes Shearer’s has very tight cushion on its financial covenants and may not be able to comply with them for the quarter ended March 31, 2012. Mistral Equity Partners and Prospect Street Ventures are sponsors of the Brewster, Ohio-based company.

Ten days later, S&P lowered the corporate credit rating of IAP Worldwide Services Inc. to ’CCC’ from ’CCC+’ and revised the CreditWatch implications to developing from negative. S&P believes there is an increased possibility of a selective default because the logistics service provider has not finalized its refinancing of credit facilities that mature at the end of 2012 or in 2013. Cerberus Capital Management LP is a sponsor of the Cape Canaveral, Fla.-based company.

The forest products and building materials sector is the industry with the most portfolio-company representatives in the latest “weakest links” list, with four. Three were added during the last three months, including Jacuzzi Brands, IPS Corp, and Hellman & Friedman LLC’s Associated Materials. Both media & entertainment and retail/restaurants each had three representatives.

S&P saw the number of defaults more than double from February. It climbed to 35, including confidential entities, with debt of $41.9 billion from 17 (with debt worth $13.2 billion). The latest count includes six confidential entities. All have received either a ‘D’ or ‘SD” rating from S&P this year.

Despite the rise in the ranks, only two of the latest additions have LBO sponsors. To date, Buyouts counted at least seven with U.S.-based buyout shop backers. These represent $6.69 billion in debt.  Of the two recent defaulters, one is involved in the aerospace and defense industry and the other is a retailer.

Hawker Beechcraft Inc. is on the list after S&P issued an SD rating on the GS Capital Partners and Onex Partners-backed business. The rating was a result of a missed interest payment. Barney’s New York Inc. also received an SD rating after it completed a debt-for-equity swap. The business has backers in Yucaipa Cos. LLC and Isthithmar World Capital of the United Arab Emirates.  Both portfolio companies were previously on the “weakest links” list.

Bankruptcy was a more active arena. It claimed more victims than defaults/selective defaults during since mid-February.  Six more portfolio companies filed for Chapter 11 bringing the year’s total to at least a dozen LBO-backed companies operating under bankruptcy protection.

RG Steel LLC, which is backed by Cerberus Capital, is one of the bankrupt portfolio companies. It filed the paperwork to operate under Chapter 11 on May 31, citing market conditions in the steel industry and a debtor’s liquidity crisis. That same day, sister news service Reuters reported that RG Steel’s ex-Chief Financial Officer Richard Caruso in an affidavit in support of the filing said the company was asserting a claim of $82 million against Severstal for a working capital shortfall. The Russian steel and mining company has issued a statement denying the allegations. Severstal is RG Steel’s largest creditor, with $36.5 million in unsecured claims, according to the filing.

One of the other bankruptcy filers is Prince Sports Inc. The Nautic Partners LLC–backed maker of tennis rackets has experienced falling sales because of increased competition. AFA Foods Inc. is another. The Yucaipa Companies LLC-backed ground beef processor cited the uproar over the use of a meat filter called “pink slime.”

Despite more activity on the bankruptcy front, S&P’s 12-month-trailing global corporate speculative-grade default rate fell to 2.3 percent in April from 2.4 percent in March. The drop represents rate declines in Europe and emerging markets and comes as default rates in the United States increased month-over-month. S&P said the general decline in default rates since November 2010 is a result of improvement in the credit markets.