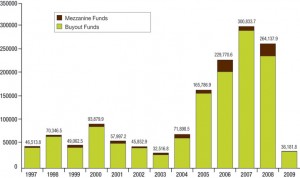 It’s time for general partners to polish up the tin cup and start rattling some coins to attract attention.

Yes, things are that tough out on the fundraising circuit, with first-half 2009 commitment totals having plunged to about one quarter the amount gathered in the first six months of 2008. Investors are wrestling with twin demons: a lack of distributions with which to make new commitments, and the denominator effect, in which declines in public equities outpace those in private equity, thus carrying investors closer to their target allocations, or above them.

Normally LPs would have gotten their private equity allocations for 2009 in the fall of 2008, but many are only getting them now, said Jennifer Rinehart, a partner at global placement agency MVision Private Equity Advisers. “Most investors are down 20 percent from last year,” said Rinehart. “However the net result is close to a 75 percent reduction in capital available for primary investments versus the prior year, as LPs look to use their allocation to cover any over-commitments from previous years, and adjust the portfolio through cash, secondaries and co-investments.”

As a result, managers trying to raise funds are finding it a difficult slog. Many are extending their closing dates, slashing their targets, trying to expand their usual investor base or making concessions on partnership terms and conditions to get their funds raised. Some are canceling funds altogether, whiles others, including , have laid off staff. At the same time, a growing list of buyout firms, including , and , have offered to reduce the sizes of funds already raised.

All told, U.S. buyout and mezzanine funds gathered $18.3 billion in the second quarter of 2009, up slightly from $17.9 billion in the first quarter. The $36.2 billion collected in the first half of 2009, of which $35.6 billion went to buyout funds and $623 million to mezz vehicles, represents only about one-fourth of the $141.4 billion raised in the first six months of 2008. At the current pace of fundraising, the annual tally for buyout and mezzanine funds would roughly mirror the $72 billion raised in 2004, a fraction of the $300 billion that was collected at the height of the boom in 2007. Our fundraising totals reflect capital raised by U.S. buyout and mezzanine firms for LBOs, private equity real estate, infrastructure, distressed-debt control and related strategies, regardless of the location of the transactions.

Some of the notable fundraising successes of the last quarter include ’s closing of its with €3.1 billion ($4.4 billion), versus a €2.5 billion target. And secured $1.7 billion in commitments for . The firm intends to invest in distressed residential land/home builders; distressed debt; and senior housing, office, hotels and commercial development in major U.S. markets and, on a limited basis, in Mexico, India and Europe. Another standout was . It raised $1.5 billion for its , which is targeting $5 billion to take control of companies through debt positions.

Looking ahead, some believe the end of the gridlock may be in the offing. “I get the sense investors feel we may have finally found a floor in the slide in fundraising that we have been experiencing since 2008—not a turnaround, but a floor upon which to build,” said Michael Sotirhos, a partner with Atlantic-Pacific Capital, a Connecticut-based placement agency. The thinking is that many economic indicators are showing signs of stabilization. Second, a rebound in the public equity markets has somewhat mitigated the denominator effect. And, finally, year-end 2008 and March 31 valuations are all in now and, with the loosening of the restrictions on valuation methodology, many investors feel that the worst (in terms of write downs) may be over.

“These are the factors most boards and CIOs will look at to decide when they can begin to make fresh commitments to the asset class,” said Sotirhos. “There also seems to be a good-sized dose of wishful thinking sprinkled on top of all that as well.”

Part of the fallout of the tough fundraising climate has been the outright abandonment of some funds. In April, , a New York-based turnaround firm, indefinitely gave up its plans to raise . Jacobson Partners had set a target of $250 million for the fifth fund, having raised about $125 million for its predecessor. Jacobson Partners invests in underperforming companies and non-core divisions of large corporations with enterprise values of $25 million to $150 million.

Other firms have trimmed targets, or extended fundraising cycles, to suit the times. modified the target for its , reducing its original $2.5 billion target by $250 million. As of June, the California-based firm had collected $1.94 billion. GI Partners, a mid-market firm, invests in the United States and Western Europe, in a variety of industries. The predecessor fund, , closed in September 2006 with $1.45 billion.

, a Charlotte, N.C.-based lower-mid-market firm, originally aimed to close with at least $330 million in May 2008. But when potential investors began delaying pledges as the economy worsened, the firm, which now has about $300 million in commitments, decided to extend the fundraising period until May 2009. CapitalSouth began raising the fund in May 2007.

Other firms have changed marketing tactics to improve their fundraising prospects, as the folks at Toronto-based have done. As of early June, the firm had raised C$110 million ($101 million) for on a target of C$350 million, a source familiar with the fundraising told Buyouts. Another C$50 million in pledges from institutional investors and an additional C$50 million from wealthy individuals is in the offing; up to seven other wealthy families might commit as much as C$25 million each. The firm, which began raising the vehicle in early 2008, saw C$200 million in likely pledges from U.S.-based institutions shrink to C$50 million when the economic crisis worsened in the fall of 2008.

At that point, Imperial Capital decided to concentrate more heavily on wealthy individuals and families, with an eye toward finishing the fund up last month. LPs include , , , a Toronto-based fund-of-funds; and , a Toronto-based boutique investment bank. So far, about 100 wealthy individuals have also committed to the fund, earmarked for investments in consumer products businesses, such as food, skin care and cosmetics, and business services, such as warehouses and engineering consultants.

Another firm contemplating a change in marketing tactics is , which may hire a placement agent to help expand the investor base of a third fund expected to hit the market in 2010 or 2011. The Pittsburgh-based firm did not use a placement agent on , which closed in August 2007 at $272 million. For Fund II, PNC Equity Partners received $75 million from its parent, with the rest coming from 14 institutional and seven individual investors, including and the . The firm invests in lower mid-market manufacturing and distribution companies.

As usual, many debut funds are struggling to find support. Teams without track records or popular investment strategies find it hard to attract attention even in the best of times, so the current environment is especially unfriendly to them. Of the 28 funds listed as “debut” in our fundraising list, only seven received pledges so far this year, gathering a total of $2.2 billion. This challenge has led some firms to close their first-time funds vastly under-target.

Consumer products and retail shop , founded in March 2007, began raising its debut fund, , in 2007 with a target range of $400 million to $500 million, but the abysmal fundraising environment led the firm to lower its target and delay closes. By April 2009, the firm had raised almost $300 million; a final close was expected in June. Andrew Heyer, Mistral’s founder, CEO and managing director, previously was a founding managing partner of . Heyer was formerly a vice chairman of CIBC World Markets Corp. and a co-head of the CIBC Argosy Merchant Banking Funds.

To lure stingy investors, firms have been trying harder to entice LPs with concessions on terms and conditions, and the trend is expected to continue. A recent survey conducted by secondary firm found that some four in five LPs expect terms and conditions to become more favorable to them over the next two years. Regarding North American buyout funds, nearly 90 percent expect better terms and conditions.

The key areas coming under pressure include fund size; management fees, which have been dropping on average 25 basis points from one fund to another; the split on transaction fees (80 percent to LPs has become common); and the distribution waterfall, whereby some GPs have begun offering LPs the chance to get all drawn-down capital back, plus a hurdle rate of return, before receiving carried interest.

Boston-based is one of the best-known examples of a firm making concessions on terms, in this case on an eleventh fund that has secured $2.83 billion in pledges, according to a May regulatory filing. The firm began marketing the fund, which sports a $3.5 billion target and hard cap of $4 billion, in January.

To get LPs to play ball, TA Associates, best known for its growth equity investments and small buyouts, decided to cut the carried interest to 20 percent from 25 percent. Other LP-friendly terms: a management fee that averages 1.74 percent of commitments per year over the fund’s life; transaction and director fees that go 100 percent to a management fee offset; and a no-fault divorce clause. Since March, the firm has received an avalanche of pledges for Fund XI from ; ; ; ; ; and . The firm plans to close the fund by Sept. 30.

Whether other firms do as well as TA Associates depends a lot on what strategies they’re pursuing. As the market shows signs of stability, LPs are expected to be especially drawn to growth equity, specific-sector opportunities, such as in energy and financial services, and regional funds in the Asia-Pacific region, according to MVision’s Rinehart. She added: “We should see more commitments, both re-ups and new, in the second half of this year and early 2010, although investors will remain extremely selective and very slow moving.”