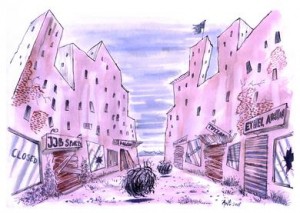 Despite fundraising continuing apace, almost everyone is steeling themselves for a rough couple of years as activity drops off, write-offs jump up, and media attention returns with a vengeance.

This, in a nutshell, is what the BVCA’s birthday jamboree threw up this month when it invited a number of the biggest names in the business to come and help celebrate the fact that it’s 25 years old, but no-one was really there to party, more to mope – see page 64 for proof.

Failed deals, administrations and liquidations are expected to hit the private equity industry in the coming months, and the retail sector has already seen its fair share of casualties, and it’s still Spring. On page 18 Ian Fraser takes a look at the prospects for investing in retail, and it isn’t pretty, despite many GPs arguing now is the perfect time to invest (isn’t “now” always the best time?).

So far this year we’ve seen discount bookseller The Works written off by Hermes Private Equity, Dolcis, the shoe store owned by Epic Investments, cast into administration, and Ethel Austin, the women’s clothing chain owned AAC Capital Partners, which has also been placed in the hands of administrators. These all join a number of non-private equity backed retailers in the high street graveyard like bed seller Sleep Depot and kid’s chain Toyzone, and JJB Sports recently announced it’s in bad shape and plans to close 72 stores and cut 800 jobs.

With house prices down in the UK – although not in London, where they have actually increased on average – consumers have reacted the only they know how, by closing their wallets and purses and putting away the credit card. The EU is so concerned it has put the UK on the blacklist for breaching the 3% limit on budgetary deficits – a result of slowing consumer spending, a cooling housing market, income pressures, and minimal employment growth.

Against this backdrop, retail stores are going to find it challenging to put it politely. Now is the time when GPs who know what they are doing really come to the fore, which is the essence of the retail feature this month – the private equity retail specialists should be able to exploit the situation by making investments at depressed prices, work hard, and then make a killing when the cycle swings back up.

When the good times are going to return is the question everyone’s asking themselves. Talk of a 1930s style recession, which was doing the rounds in March and February, seems to have died down, but most economic observers agree that 2009 could be worse than 2008. For private equity, this could mean slim pickings for a while, which is why many firms are turning their attention away from buying assets the traditional way towards acquiring debt positions on LBO transactions, including on their own deals. See page 7 for more.