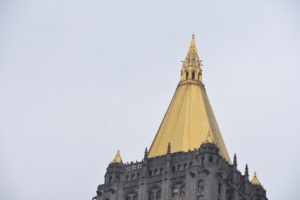 You don’t see this every day.

GoldPoint will now work with LPs of its three active funds to determine their futures. Generally, when a key-person provision is triggered, the fund immediately halts making new investments. LPs then have the right to determine whether to reactivate the fund for new investments, which usually involves negotiations around new leadership and even fee and other economic concessions.

LPs can also decide to essentially shut down the fund by permanently canceling its ability to deploy any new capital. Key-person protections are vital for LPs in private funds, who expect that the team they back at the beginning of a fund will be there at the end, usually 10 or more years down the line.

GoldPoint has a cushion compared to independent private investment firms in that NY Life, with $593 billion under management, has always been among the firm’s largest LPs, which gives GoldPoint a cushion for capital raising.

NY Life is supportive of the group going forward, which would provide GoldPoint a flow of capital even if external LPs choose to cancel remaining funds, one of the sources said.

“That capital base is extremely durable,” the source said.

The exodus is being attributed to a difference in philosophy and vision for the business going forward, sources told Buyouts. “This was borne out of a strategic difference of opinion,” one of the sources said. None of the executives who resigned could be reached for comment Thursday.

Long-time GoldPoint chief John Schumacher, who served as chairman since 2010 and CEO from 1999 through 2009, last year stepped back into an advisory role. Earlier this year he joined Gryphon Investors as a partner.

New York Life moved quickly to fill the roles, shifting responsibilities to leaders of some of its other “boutique” alternatives businesses, who will retain their existing roles as well, according to a “team update” on GoldPoint’s website.

Four senior leaders from PA Capital and Madison Capital were named to leadership roles while also retaining their current responsibilities.

And Robert Douglass, chief credit officer at Madison, moved into a managing principal role with a focus on private debt investments, while Sunil Mehta, head of generalist originations at Madison Capital, will take on the title of managing principal at GoldPoint focusing on overseeing the core sponsors and GP sponsor relationships.

GoldPoint was formed in 1999 as New York Life Capital Partners. It renamed itself GoldPoint in 2012, a reference to the iconic gold pyramid atop NY Life’s headquarters.

“We have been investing in the US private equity markets for decades through GoldPoint Partners, Madison Capital, and PA Capital. We have tremendous confidence in the leaders and staff across our alternative investments business who will continue to deliver outstanding service to our sponsors and clients and manage the funds consistent with their investment objectives during this transition period,” according to a NY Life spokesperson.