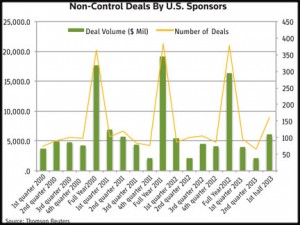 “The returns overall for the venture asset class haven’t been good in the last five years or so,” said Larry Schloss, chief investment officer of the city’s $137 billion pension system.

At the same time, the pension system OK’d a $225 million allocation to Olympus Growth Equity Fund VI, a growth equity and buyout fund based in Stamford, Connecticut, as part its emphasis on growth equity. It is also holding $274 million of dry powder for emerging managers that often specialize in similar investments.

“With a growth capital fund, there are some very good firms that you can put $100 million into that’ll make you buyout-like returns” to help achieve an annualized target of 15 percent, Schloss told Buyouts. He declined to provide any data on specific fund investments.

In terms of returns, UTIMCO’s $5 million contribution to the 1994 Austin Venture IV LP, a U.S. growth fund, earned it an IRR of 73.1 percent and its $15 million commitment to 1997’s Austin Ventures V earned an IRR of 31.89 percent. On the down side, its $100 million commitment in 2011 to Northstar Equity Partners III LP, an Asia growth fund, has so far earned an IRR of negative 12.06 percent, although the fund is still quite young.

The Big Apple’s move comes as private equity and venture capital firms converge on growth equity deals as a way to generate returns outside of classic venture deals and leveraged purchases of whole companies.

The investments typically help a revenue-generating company step up its expansion through injections of cash in exchange for minority stakes. Pioneered decades ago by firms such as TA Associates, Summit Partners and General Atlantic, growth equity funds now represent a budding asset class of their own.

Now, more private equity shops ranging from Medina Capital or Brentwood Associates on the mid-market side to mega-firms such as Carlyle Group, Goldman Sachs, TPG, Blackstone and Silver Lake compete in the growth equity arena.

Globally, 21 growth equity funds were formed in 2011, up from 19 in 2010 and 16 in 2010, according to data from Cambridge Associates. In a sign of growing popularity of the strategy, the past two years exceeded the average of 18 per year dating back to 1992.

Pine Brook Partners is seeking $2 billion for Pine Brook Capital Partners II LP and is about half way there, according to a report by sister publication peHub. Oregon Investment Council committed $75 million to the fund, while a separate $75 million pledge came from the New Mexico State Investment Council and $50 million came from the Kansas Public Employees Retirement System.

The rise of growth equity funds may also reflect the increasing focus by U.S. buyout shops on Asia, where outright purchases of firms are usually prohibited in favor of minority investments.

“An ever-growing number of firms, many with very different historic roots, converge in this sector in search of what the growth equity pioneers originally sought—superior returns by investing in profitable companies with more growth potential than mature companies and lower risk of capital loss than investing in start-ups,” said John LeClaire, co-founder and the chair of Goodwin Procter’s Private Equity Group.

In the largest non-control deal since 2010, Blackstone Group led an investor group in a $2 billion deal to buy senior subordinated paid-in-kind units convertible into an undisclosed minority stake in Cheniere Energy Partners LP, a Houston-based provider of natural gas storage services and a majority-owned unit of Cheniere Energy Inc. The company is currently deploying capital to build facilities for exporting liquid natural gas from the United States.

In the past three-and-a-half years, Kohlberg Kravis Roberts & Co stole the show with 35 non-control investments, including $400 million in June, 2010, for a 40 percent stake in Hilcorp Resources LLC, an energy firm.

Warburg Pincus ranks second during that time period with 33 non-control transactions, including a $230 million deal in March, 2010, to buy an undisclosed stake in life insurance firm Primerica Inc from Citigroup, and a $200 million deal on May 29 for a 20 percent stake in Vincom Retail Co Lt of Vietnam from Vingroup JSC.

Carlyle Group and TPG Capital rang up 25 non-control investments since the start of 2010, followed by 18 for the Blackstone Group, Main Street Capital and JumpStart Inc. Those figures do not count investor groups, with a large variety of participants, which accounted for 337 out of more than 1,300 non-control transactions since 2010.

Pine Brook Partners, which raised $1.4 billion for its first fund in 2009, has closed 22 deals, only one of which was a classic buyout. Unlike other growth equity firms, Pine Brook takes controlling stakes at early phases of company development and teams up with founders. Since it’s working in the established areas of financial services and energy, it doesn’t face product development and market risks of venture investments.

“We have a growth bias,” said Aggarwal. “If something looks a bit more like a growth equity investments or a buyout, the lines are getting a little blurred in the industry. We’re pretty flexible.”

Brentwood’s fifth restaurant deal in the last decade, Lazy Dog now operates 12 restaurants but could expand rapidly. One of the firm’s other investments, Zoes Kitchen, now operates 88 restaurants after starting out in with 19 units in 2007, when Brentwood came on board.

“We see [Lazy Dog] moving beyond the West Coast,” Aggarwal said. “If we could get to national presence over time that would be a great outcome….We know about real estate development and there’s insight we can offer at the board level about the challenges of growing at an accelerated pace.”

(This story has been updated to correct the time element of the New York City Pension Funds shift toward growth equity and away from venture capital funds. The shift took place two years ago and continued this summer.)