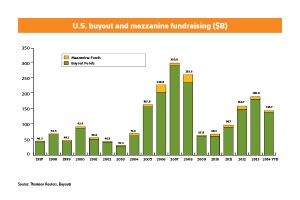 The firm is trying to recover from two financial-crisis-era funds, which took some devastating hits from the loss of Washington Mutual and the former TXU, now in bankruptcy court under the name Energy Future Holdings.

TPG Capital is an example of a firm that may be challenged to attract investors into its latest fund. The firm’s 2006 fund as of March 31 was generating a 2.4 percent net IRR for backer California Public Employee’s Retirement System, while its 2008 fund was generating a 10.3 percent net IRR—putting both funds below median for their vintage years according to the Buyouts returns database with most data as of year-end.

A source close to the firm pointed out in an email that the firm’s recent performance has been solid, and observed that the terms “are very much in line with those being offered by other GPs, regardless of fund performance.”

Indeed, the idea of using incentives to draw in bigger checks at a quicker pace has become an almost routine part of marketing these days, according to numerous LP and advisory sources interviewed by sister publication peHUB.

What was once a headline-grabbing novelty among mega-funds struggling through a tough fundraising environment post-financial crisis has become part of the package general partners bring to the negotiating table.

And while in 2010 and 2011 general partners needed that extra push to get over the finish line to their target, today GPs need that extra bit of zip to help differentiate themselves in what has become one of the most crowded private equity fundraising markets of all time.

All told Buyouts counted some 400 U.S.-based sponsors of buyout and mezzanine funds out raising money this year, seeking a total of more than a third of a trillion dollars, or $358.7 billion (see accompanying tables and charts). To date they have secured some $254.4 billion of that, suggesting well over $100 billion is still being sought but not yet raised. In the third quarter (through Sept. 29) U.S.-based buyout firms and mezzanine firms raised an estimated $49.8 billion to bring the year-to-date total to $145.7 billion.

TPG Capital is aiming to raise between $8 billion and $10 billion for its TPG Partners VII, a big step down from its $19 billion sixth pool that was generating a 1.39x total value multiple and an 11.9 percent internal rate of return as of June 30, 2014 for backer Oregon Public Employees Retirement Fund.

This is reminiscent of some of the big European shops who, shortly after the world began emerging from the financial crisis in 2010 and 2011, started offering early close discounts. Cinven, Permira and BC Partners all tried to incentivize LPs to get their commitments in early.

According to the PE/VC Partnership Agreements Study 2014-2015, published by Thomson Reuters, about 14 percent of North American buyout funds offer special incentives to come into a first close, while the figure is 35 percent for funds of funds and secondary funds. Nearly one in five (18 percent) North American buyout funds offer fee breaks for bigger commitments, as do 42 percent of funds of funds and secondary funds.

“The market has gotten much more creative about incentives and creating urgency around (fund) closes,” said Neha Champaneria Markle, portfolio manager with the private equity fund group at Morgan Stanley Alternative Investment Partners. “There are a number of things that can catalyze action, whether it’s offering co-investment, offering preferential treatment in a secondary, (or) offering certain terms that might be meaningful to a specific investor.”

First-close discounts “highlight one of the biggest challenges sponsors have in fundraising—getting some impetus to getting to that first close. That is often the hardest part of fundraising,” according to Jordan Murray, a partner at law firm Debevoise & Plimpton.

Some firms like TPG Capital and Bain Capital have also begun offering options for management fees and carried interest levels. TPG Capital, for example, is offering a conventional fee option—a 1.5 percent management fee that drops to 0.75 percent after the investment period. Or LPs can opt for a “J-curve mitigant” fee structure that allows for roughly the same amount of fees, but is back-ended to smooth out returns, Buyouts reported in September. The second option includes a 0.625 percent management fee during the investment period that jumps to 1.5 percent of invested capital.

There are also fee holidays, in which early investors get a fee break for a period of time, or even incentives that have early LPs paying part of the management fee on invested capital, and the balance on committed capital, for a certain period of time, Murray said.

“All those formulations take you to the same place,” Murray said. The GP gets to say, ”’if you are there for us in the first place, you will pay less than those who come later.’”

Beyond those terms, GPs are also offering co-investments or access to secondary deals to early LPs, sources said.

“If you have a co-investment or secondary around your fundraising, that always catches the LP’s interest,” said Christian Kallen, vice president on the fund investment team at advisory shop Hamilton Lane.

The $49.3 billion raised by U.S. buyout firms and mezzanine firms in the third quarter marked a drop from the $56.8 billion secured in second quarter but a rise from the $39.1 billion raised in the first. Assuming a strong fourth quarter 2014 would become the third $150 billion+ year in a row and could easily be the biggest fundraising year since 2008, when U.S. buyout and mezzanine firms raised $263.6 billion.

Perhaps the biggest fundraising news of the quarter came from The Blackstone Group, which hit the market seeking $16 billion for its seventh flagship buyout fund. Between its strong track record, lack of rival mega-funds in the market, and a desire by pension funds and sovereign wealth funds to put large slugs to work with favored managers, Blackstone Group is expected to make quick headway. The buyout firm also launched its latest “Tactical Opportunities” fund, seeking $7 billion to $8 billion; the pool would be earmarked for an eclectic mix of investment opportunities, including Latin American real estate and distressed mortgage loans.

Among other significant offerings, New Mountain Capital raised the target of its fourth generalist fund to $4 billion, having already raised more than $3 billion, according to sister website peHUB. The cap is $5 billion. Backers include Harford Healthcare, Maryland Retirement and Pension System, Nebraska Investment Council, Pennsylvania Public School Employees’ Retirement System and Teachers’ Retirement System of the State of Illinois.

The Carlyle Group took in $3.9 billion for its fourth Asia fund, marking the second-largest private equity fund ever earmarked for the region. The firm beat its $3.5 billion target. New York State Teachers’ Retirement System is a limited partner.  Crestview Partners, founded by two former Goldman Sachs executives, secured $2.4 billion of its $3 billion target for its third fund. Backing came from Kentucky Retirement System and Kansas Public Employees Retirement System.The buyout shop has been active in such markets as cable TV, consumer products and crude oil purchasing and marketing. Turnaround specialist Littlejohn & Co. wrapped up its fifth fund at $2 billion, ahead of its $1.5 billion target. The fund counts Maryland State Retirement and Pension System as an LP. Stripes Group, a specialist in software-as-a-service and branded consumer products, took just a single close to reach its $500 million target and hard cap.

Energy funds remained popular with investors this year, taking in $18.2 billion, or well over 10 percent, of the total raised. Energy Spectrum Capital got to the $784 million mark on its seventh fund, according to a regulatory filing. It is seeking $1.2 billion for investments in oil and gas production, treatment, storage and transportation, among other areas.  First Reserve closed its thirteenth flagship energy fund at $3.4 billion with help from backer Washington State Investment Board, although that was well below its original target of $6 billion and its reduced target of $5 billion. (News of the fund came too late to be included in our third-quarter fund tables and charts.)

An article in this edition of Buyouts suggests shaky recent performance as part of the reason. A spokeswoman provided a statement from the firm saying it “is delighted to have received support from both long-standing existing LPs as well as new investors from around the globe” for the fund and pointed out that the firm is “coming off an oversubscribed closing of its second energy infrastructure fund at its hard cap of $2.5 billion…”

Don’t expect any let-up in the supply of funds in the market in coming months. Buyouts Magazine has already identified more than 60 sponsors of private equity funds around the world likely to launch later this year or in 2015 seeking more than $60 billion. Among them could well be Goldman Sachs Group Inc, which news service Reuters said may launch a new infrastructure fund as a follow-on to a 2010 predecessor.