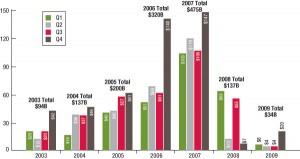 “The best thing that I can say about 2009 is that it’s over,” said Eric Malchow, a managing director at Chicago investment bank Lincoln International. “It started off as scary, and then it moved to frustration. Now that people are finally more stable and secure, they’re looking hopefully to 2010.”

Though the environment will remain challenging due to the credit shortage, market participants expect to see a burst of M&A activity early in 2010 brought on by economic improvements as well as by sellers scrambling to beat the impending increase to the capital gains tax. Moreover, buyout firms are eager to put their stagnant investment dollars to work in new deals and return capital to investors with a round of exits.

Full-year 2009 was down on all points compared to 2008. U.S. buyout shops closed a total of 530 control-stake deals last year for a disclosed value of $34.7 billion. Those figures represent a 39 percent shortfall compared to 2008’s LBO deal count of 872 and a 75 percent dive from that year’s $137.0 billion disclosed value, according to Thomson Reuters, publisher of Buyouts.

The fourth quarter’s closed-deal count of 98 transactions (through press time on Dec. 15) marked a 32 percent quarter-over-quarter drop from the third quarter’s 144 closed deals, and a 31 percent drop-off from the 142 deals consummated in the fourth quarter of 2008. In terms of dollars put to work, 2009’s fourth quarter showed a marked pick-up, thanks to a few multi-billion transactions. The previous quarter’s $20.2 billion in disclosed deal volume represented a 432 percent increase compared to the $3.8 billion that was disclosed in the third quarter, and a 185 percent increase from the $7.1 billion put to work in the last quarter of 2008, according to Thomson Reuters.

Indeed, the only three multi-billion-dollar deals to close in 2009 all came in the final quarter and, perhaps to nobody’s surprise, the largest of the bunch was born from distress. In the year’s only 11-figure LBO, buyout/hedge fund managers and took the lead in October to acquire global automotive supplier Delphi Corp. out of bankruptcy. Next in line was The ’s $2.7 billion acquisition of amusement park operator Busch Entertainment Corp. in December from Anheuser-Busch InBev, followed by the $2.0 billion -led acquisition of communication software provider Skype from eBay in November.

The mere fact that these deals got done demonstrates improvement in the market, and could be a sign that more will come in 2010. “There is a momentum affect in M&A, especially as the cycle turns,” Lincoln International’s Malchow said. “Seeing some well-known firms doing deals will start to build confidence in others.”

Leverage, however, remains an issue. The high-yield market—despite being open for refinancings on the portfolio company level—is still closed when it comes to financing new LBOs, and continues to put a squeeze on the consummation of larger deals. The lack of junk bonds for new deals forces firms to have to cobble together sizable lending syndicates in order to get enough financing to close their deals.

Meanwhile, as was the case throughout 2009, the availability of credit for mid-market deals in 2010 is expected to be a story of haves and have-nots as lenders continue to pick their bets very carefully or otherwise remain sidelined by capital constraints. “If a business didn’t feel much headwind in 2009, the leverage markets are open to them,” Malchow said. “If the opposite is true, then they’re still not getting access to the credit markets.”

GE Capital, the sizable finance arm of industrial giant General Electric and the parent of mid-market lender GE Antares, is reportedly aiming to reduce the size of its balance sheet by up to 25 percent, leaving a question mark around how active the lender will be in 2010’s LBO arena. CIT Group, another historically significant source of LBO financing, also remains a question. The troubled lender, which emerged from bankruptcy on Dec. 10, is also rumored to be pairing down the size of its balance sheet.

Such instances could contribute to a significant supply-side shortfall of debt capital in the year to come.

“For 2010 we estimate that there will be a $7 to $10 billion hole in the middle market for first-lien-type capital,” said Leonard Tannenbaum, president and CEO of Fifth Street Finance Corp., a listed specialty finance company focused exclusively on sponsor-backed deals. Based in New York, Fifth Street’s investments typically range in size from $5 million to $40 million and are principally in the form of first and second lien debt.

Tannenbaum said that total leverage of up to 3.5x EBITDA is attainable in the current market, with all-in pricing on the senior tranche tending to fall between 12 percent and 14 percent (including a LIBOR floor of 3 percent). Meantime, it’s expected that that firms will continue to make up for the lack of leverage with oversized equity checks. “Fifty percent [equity] does seem to be the new 30 percent, there’s no doubt about that,” said Justin Abelow, a managing director at mid-market investment bank Houlihan Lokey.

Portfolio maintenance was the mantra among the buyout community in 2009, a fact that was born out in the deals that did close. Of all deals that closed in 2009, almost half (48 percent) were add-on acquisitions to existing portfolios, up from 37 percent in 2008.

In terms of deal size, as the credit drought continued throughout 2009, smaller transactions (which presumably require less debt) accounted for a larger portion of the dealscape. Of the 117 deals with disclosed values that closed last year, 81 percent had total purchase prices of less than $250 million. In 2008, the percentage of such deals was 66 percent, while in 2007 it was 47 percent. At the larger end of the spectrum, only 5 percent of 2009’s disclosed deals were valued north of $1 billion, compared to 13 percent in 2008 and 23 percent in 2007, according to Thomson Reuters.

The Blackstone Group, which acquired Busch Entertainment for $2.7 billion and the U.K.-based Broadgate Office Complex for $1.7 billion, was the only firm to close more than one billion-dollar-plus deal in 2009, according to Thomson Reuters. Other firms that participated in the larger deals of the year include ., which partnered with to buy South Korea-based beer maker Oriental Brewery Co. for $1.8 billion, and ., which led a consortium early in the year to buy failed bank IndyMac Bancorp Inc. for close to $1.6 billion.

As for the industry sectors tracked by Thomson Reuters, the top four segments (ranked from greatest to least) of 2009—industrials, high technology, consumer products and services, and materials—appeared in identical order to 2008’s top four. The media/entertainment and health care sectors, which respectively ranked fifth and sixth in 2008, switched places in 2009. The consumer staples and retail sectors both slipped two notches in 2009 to ninth and tenth place, respectively.

The and The were the only two LBO shops in 2009 to close more than 10 deals, according to Thomson Reuters.

Carlyle Group, based in Washington, D.C., was last year’s most active buy-side investor. The firm, which has more than $86 billion under management, consummated at least 16 control-stake transactions, including eight platforms and eight add-ons. The firm’s largest disclosed deal was its $362 million real estate acquisition of the KDX Toyosu Grandsquare Building in Tokyo. Cleveland, Ohio-based Riverside Company closed at least 11 control-stake deals last year, seven of which were for new platform companies. None of the firm’s deals—which included the acquisitions of PharmMD Solutions LLC, a provider of medication management software and services, and Precision Wire Components LLC, a maker of wire components used in medical procedures—had disclosed values.

Tax cuts enacted by the George W. Bush Administration are set to expire at the end of 2010. Among these, the capital gains tax will likely revert to its historic 20 percent rate, up from15 percent. Anticipation of that tax increase has already served as an incentive for business owners considering a sale somewhere down the line to push that date forward.

“We concluded a deal with a seller who made it abundantly clear his number-one motivating factor [for selling] was that he was petrified of capital gains increasing when Obama won,” said David Panton, a partner and co-founder of Atlanta-based buyout shop . Panton declined to name the company, saying only that the deal closed in late 2008.

Some expect the rate of such sales to increase as the expiration date for the tax discount approaches. “In the land of entrepreneurially-owned and family-owned businesses, people are very sensitive to changes in the tax code that might disadvantage them later, and I think you’ll see people leaping to sell now for that reason,” said Houlhan Lokey’s Abelow.

Buyout shops also have a motivation to sell. The two-year lull in the exit market has hurt the time-sensitive internal rates of return on a number of LBO funds. Moreover, firms looking to hit the fundraising market in the near future want to give distribution-starved LPs some incentive to re-up.

The improving economy could also send more companies to the auction block in 2010. Several investment banks, including Harris Williams & Co. and Lincoln International, have been tapped by sellers to initiate auction processes for their companies once the economy improves, professionals from those firms told Buyouts.

According to the most recent data from the U.S. Department of Commerce, gross domestic product rose at an annual rate of 2.8 percent in the third quarter of 2009 compared to a decrease of 0.7 percent in the second quarter. If the economy continues to improve, it’s likely that sellers that made it through the storm will want to take some money off the table.

Incentives abound to act on the buy-side as well. Between the record-breaking fundraising years of 2007 and 2008, U.S. LBO firms raised well north of $500 billion, according to Buyouts, and have had scant opportunity to put that capital to work. At mid-year 2009, there was approximately $400 billion of overhang, or un-invested capital, in the U.S. private equity market, according to the alliance of Merger & Acquisition Advisors and PitchBook Data Inc.

Just where the supply-demand balance will end up remains to be seen. But a lot of money chasing the same deals never bodes well for pricing.