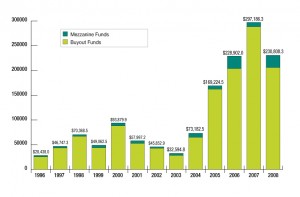 Despite many investors being near, at or beyond their target allocations to private equity, U.S. buyout and mezzanine fundraising totals has so far held up this year. But more the more, the market feels like it’s at a turning point.

Through the third quarter of 2008, U.S. buyout and mezzanine firms raised $231 billion for investments both in the United States and around the world, up from $216 billion at the end of 3Q07. But the market will be hard-pressed to meet or beat last year’s total of $297 billion.

As for fund size preferences, mega-fund managers are still raking it in. But having reached $82 billion so far this year, they are unlikely to see the total of $135 billion achieved in 2007 (see chart). The most impressive gathering in this category in 2008 to-date is ’s $19.8 billion collected this year for .

Firms raising funds with a target range of $1.1 billion to $5 billion are in this year’s sweet spot; these funds have so far collected $90.5 billion, and may reach $120 billion for the year, nicely surpassing 2007’s $89 billion total. Wildly beyond its $4 billion target was distressed specialist ’s , which amassed $6.1 billion.

If the current fundraising pace continues for firms with targets of $300 million to $1 billion, their total for the year may beat that of 2007. So far they’ve gathered $19.1 billion, which is rapidly approaching 2007’s $22.7 billion. handily won in this category, scoring $1.1 billion, all raised this year, for its fourth fund, which had a $1 billion target. The major struggle this year has been for sub-$300 million funds, which have only raised $3.3 billion through 3Q08, nowhere near last year’s total of $6.4 billion. ’s fund ruled in this group, having hit its target of $280 million for its oilfield services-focused fund.

The biggest challenge, however, facing fundraisers is that many institutional investors, especially those with aggressive target allocations to private equity, are reaching or surpassing those targets. The major causes of this are the denominator effect (shrinking values for public equities causing other asset classes to form a larger percentage of the total portfolio), and the reduced amount of capital being returned to limited partners through realizations.

“You can assume just about all mature institutional private equity portfolios are overallocated, unless they had a recent increase to the target allocation. The [recent] 15 percent drop in public equity market value alone puts most private equity portfolios 1 percent to 3 percent over allocation,” said Daniel Vene, a vice president with C.P. Eaton Partners, a placement agent, contacted before the bailout deal failed to pass the House (which sent the market into another tailspin). “Events of this magnitude occurring at such velocity are truly unprecedented and force LPs to be more prudent with their decisions,” added Vene. “That prudence also manifests in a flight to quality.”

Still, despite all the challenges, many LPs have so far shown few signs of slowing their private equity commitment pace, staying loyal to private equity and its relatively attractive returns. “It is still too early to tell how much of an effect the Wall Street events will have on fundraising because the broader ripple effects have yet to be played out. These events don’t directly impact that many programs, and LPs are still taking meetings, reviewing funds and making commitments,” said Michael Sotirhos, a partner at placement agent

A Fork In The Road

Investors are dealing with the issue in a variety of ways. Some, such as the , have raised their private equity allocation targets. Others, such as the and the are plowing ahead with pledges without adjusting their asset allocations; and some, like the and the , are slowing their investment pace by making smaller or fewer commitments. One of the biggest of them all, , said it is more closely monitoring its private equity target allocation and will consider adjusting the target allocation if conditions warrant.

Late last year, the $63 billion Washington State Investment Board grew its target allocation to private equity from 17 percent to 25 percent, and established a 21 percent to 29 percent range. As of March 31, the LP had an actual private equity allocation of 21.8 percent, and, according to Liz Mendizabal, spokesperson, by July 31 that figure had jumped to 22.46 percent, or roughly $13 billion, thanks in part to commitments approved by the board year-to-date totaling about $3.1 billion.

Board members commented at a June meeting on the potential for becoming overweight in private equity. But when asked how they might deal with this issue, Mendizabal noted that the broad range is in place because you can’t be precise with long-term, illiquid investments. “Despite the environment, we don’t anticipate going over this range,” she said. And regarding the financial crisis, she noted that there has been no discussion about it leading to any changes, “so for now the allocation is 25 percent with a range of plus or minus 4.”

As the $55.7 billion Virginia Retirement System approaches its 10 percent private equity allocation limit (now at 8.4 percent, or about $5 billion) a July 2008 board document noted the challenges in the private equity world, including that attractive exits are harder to achieve, the pace of new investment has slowed, funding is more expensive, and IRRs are falling. The document goes on so say that the LP intends to continue making private equity commitments. Ten percent is the limit (not the target) that can be invested in private equity, added Jeanne Chenault, spokesperson, and because investments are made as opportunities present themselves, the LP cannot forecast if or when it will reach the limit. It is not clear what will happen when the state does.

The $160 billion California State Teachers’ Retirement System made more than $3.5 billion worth of private equity commitments this year despite being over its target of 9 percent and near the upper limit of its allowed range of 4 percent to 11 percent, at 10.4 percent, or about $16 billion. “Because we’re still within the 4 percent to 11 percent range, we’re not making any changes. We haven’t any plans to change the pace of investment in our PE portfolio,” said spokesperson Ricardo Duran. The state pension fund is conducting an asset allocation study this year that could lead to a change in the target allocation by next summer.

The $33 billion Pennsylvania State Employees’ Retirement System, with an actual private equity allocation of 17.10 percent, or $5.7 billion, above a target allocation of 14 percent, but still within an allowed range of 10 percent to 18 percent, has been making smaller private equity commitments than previously. For calendar year 2008, the program has already made 27 commitments totaling $898.7 million. For example, whereas the LP made a $25 million commitment to , a vehicle of , which seeks $1.2 billion for Fund IV, it pledged $35 million to the $750 million . Despite the current financial turmoil, “there are no plans to change the target. We will be investing primarily to maintain relationships with managers who have provided superior performance in the past, and to maintain the portfolio at or near the target,” said Robert Gentzel, the LP’s spokesperson.

The $42 billion Los Angeles County Employees Retirement Association has an actual allocation to private equity of 8.4 percent, or about $3.5 billion; the target allocation is 7 percent, with a range of 4 percent to 10 percent. Although the LP has committed $735 million to private equity so far this year, it has slowed its investment pace for the rest of the year, said Christopher Wagner, senior investment officer. “We are currently assessing our plan for next year, but nothing has been decided yet,” said Wagner.

The maverick of the institutional world, the $239 billion California Public Employees’ Retirement System, has a three-year private equity target allocation of 10 percent, established in December 2007, with a range of 7 percent to 13 percent. In July, the actual allocation was 10.9 percent, but may reach 12 percent at the end of 2008 and could surpass the limit in the foreseeable future. One wonders how long CalPERS can keep up the pace. Through September 22, general partners had drawn down some $26.1 billion this year for investments, on top of the $20.4 billion they did in 2007. On the commitment side, CalPERS has, on average, put $80 million more in the market each month this year versus last.

CalPERS said this fall it plans to consider adjusting its allocation to private equity, as the denominator effect, slower distributions and continued draw-downs on commitments threaten to push the program past the upper limit of its range, according to an August 2008 document. However, Clark McKinley, information officer, said this does not imply the private equity target allocation will be raised, but simply that the target is not set in stone. He added: “Nothing is on the table about this. As the market value of public stocks fall in our portfolio, the private equity share under our asset allocation tends to go up since we’re getting continued double-digit investment returns on private equity.”

Meantime, CalPERS said it also wants to be more responsive to market dynamics and is trying harder to stay on top of its asset allocations and to make adjustments sooner than every three years, if warranted. “This is the first year we’ve had periodic reports on asset allocations,” said McKinley. The board requested regular updates on how asset classes were doing relative to their allocation targets, and investment officers now use quarterly short-term targets to stay on track.

So for now, institutional investors seem to be open for business. “This crisis will continue to deplete pools of investable capital,” said Stephen Moseley, president of advisory firm , “but we expect only a small impact on private equity fundraising, partly because institutional investors have observed over time that the best private equity vintages have been launched in the worst economic environments; 2001-2002 looked similarly grim, and the private equity dollars deployed at that time returned some eye-popping multiples of cost.”

That may be, but a prolonged bear market will surely mean the end of the fundraising bull market.