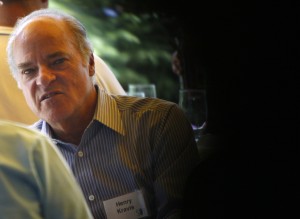 KKR & Co disclosed in SEC filings that it had raised $1.5 billion for KKR Global Infrastructure Investors II, but that amount doesn’t include about $400 million raised in Europe, the source said. The fund has a hard cap of $2.75 billion.

The predecessor fund, called Infrastructure Fund, raised $1 billion in commitments plus another $1.1 billion in various infrastructure co-investment funds, KKR has said. That fund has a vintage of 2011, according to Thomson Reuters.

KKR Global Infrastructure Investors II offered fee discounts to limited partners committing prior to the first close, according to documents from the Leicestershire County Council, which approved a $30 million commitment to the pool, according to documents viewed by Buyouts in July. KKR planned to charge a 1 percent management fee and 10 percent carried interest over an 8 percent performance hurdle for LPs in the first close. Carried interest will increase to 15 percent for LPs coming in later.

LPs have been interested in infrastructure as a way to protect against inflation, since the assets class often includes properties or entities able to increase their fees, tolls and other revenue sources to compensate for higher prices.

The new KKR fund is part of a series of second funds either in the market now or launching shortly. Speaking at the Bank of America Merrill Lynch Banking & Financial Services Conference Nov. 12, Chief Financial Officer William Janetschek said that KKR will likely raise $10 billion to $20 billion in the next 12 to 24 months.

Separately, KKR’s $8.7 billion North America Fund XI is now more than 50 percent invested after KKR commenced the buyout pool in September 2012, Janetschek said. He said the investment cycle for a flagship fund typically lasts six years, but the NAXI fund is ahead of that pace so far.

Janetschek also answered a question about succession planning, saying firm co-founders George Roberts and Henry Kravis remain engaged at the firm on a day-to-day level. He said he expected them to continue for at least the next five years.