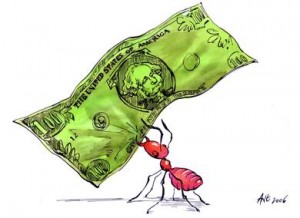 With collusion accusations aimed at private equity’s biggest players it is refreshing to see that some of our colleagues are being lauded as Nobel Laureates for peace. Muhammad Yunus and Grameen Bank, which he founded, are sharing this year’s Nobel peace prize. The judging committee said the award was for developing “an impossible idea” which has been made possible by private banks and private equity investors that fund microlending banks.Though Grameen Bank stopped accepting donor funds in 1995, there are many others that still do. Microcredit banks lend small amounts of money, usually around US$100, to people without collateral, mostly women, for business investments such as buying a cell phone for a village or a bicycle to take pumpkins to market. To date, Grameen has dispersed more than US$5.72bn to 5.77m borrowers. The Nobel Committee says: “Micro-credit has proved to be an important liberating force in societies where women in particular have to struggle against repressive social and economic conditions. Economic growth and political democracy can not achieve their full potential unless the female half of humanity participates on an equal footing with the male.” Though it is a huge honour to win the Nobel peace prize, microfinancing is not charity work but big business and investors including: Citigroup, Deutsche Bank and Soros Investments are getting involved. Interest rates vary but Grameen Bank charges around 60%, according to its financial statements and Finca, an American microlending player charges 49%. These banks state that they have around a 98% repayment rate so despite the significant administration costs associated with setting up a village bank these bankers are making profits. Yunus says: “Charity is not a solution to poverty, it fosters dependency, so perpetuating poverty. Human beings merely require an opportunity to unleash their potential and credit provides the opportunity and should, therefore, be considered a human right.”

Grameen has undergone a restructuring, allowing people to open savings accounts and pension funds with the bank. It has also started offering home loans and educational loans to both men and women. Grameen Bank also runs the Grameen Fund, established in 1994 this venture capital fund invests in business that offer good return on equity investments as well as direct and indirect benefits for the rural poor. This fund aims to provide equity finance to entrepreneurs without collateral trying to setup innovative projects with preference to businesses concentrating on information and communication technologies and bio-engineering. The fund also invests in risky ventures with untested technology or products as new or existing companies providing capital for modernization or expansion. The fund also invests in buyouts or buy-ins of existing companies provided that the activities of the firms are socially desirable and bring benefits to the poor. And finally the fund develops enterprises with prospects for export or import substitutions that uses indigenous raw material or provides extensive employment to the rural poor.