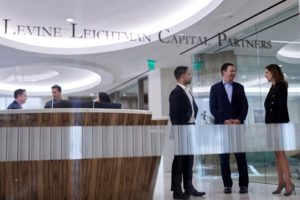 Levine Leichtman Capital Partners, one of the market’s oldest private equity firms, surpassed the target and cap set for its third lower-mid-market fund, bringing in $1.38 billion.

While marketing, the cap was bumped up to $1.35 billion due to strong demand from limited partners, Frankel and Weinberg said. The final close amount includes a GP commitment.

LMM III – which is more than double the size of LMM II, closed in 2016 at $615 million – had a relatively rapid fundraising, with almost all of it done virtually.

The pace of fundraising, coupled with demand, points to the attractiveness of Levine Leichtman’s structured PE strategy, Frankel said: “LPs like tried-and-true strategies and firms with tenure. They also appreciate our long-term performance, achieved across diverse cycles and markets, but by taking less risk.”

Levine Leichtman did seven full realizations across all funds over the past 10 months and expects to reach 10 by year’s end. The most recent was FlexXray, a food-safety inspection services provider sold in July to Warburg Pincus and Tilia Holdings.

A mix of investors committed capital to LMM III, two-thirds of them returning LPs. They include about two-dozen institutions, such as Florida Retirement System Trust Fund, as well as family offices and high-net-worth individuals, and some portfolio company executives.

LPs are based “all over the world,” Frankel said, including North America, Europe, the Middle East and Asia. Campbell Lutyens was the placement agent.

LMM III “will remain steadfast” to the strategy of its two predecessors, Weinberg said.

The fund will deploy the same structured PE strategy pioneered by Levine Leichtman for its flagship and European vehicles, combining in majority control-oriented investing both equity and debt. In the case of LMM III, this will be directed to US lower-mid-market businesses.

Target opportunities will have less than $50 million of revenue. Dealflow will be sourced in sectors that are resilient and non-cyclical, such as business services, education and engineered products and franchising, where Levine Leichtman has built a robust pipeline. Minimal leverage will be used.

A key to the strategy is “asset selection,” Weinberg said, focused on “high-margin, high-cash-generating companies that are leaders in their spaces.” Through value-added initiatives, Levine Leichtman helps owner-operators to “double, triple or quadruple EBITDA and cash flow,” he said. “We have sometimes even exceeded that,” Frankel added.

While the strategy will not change, LMM III will likely do more deals because of its bigger capital pool, Frankel said. LMM II did eight platform investments and 12 add-on acquisitions. Its final platform was Blue Ridge, an ESOP and 401(k) administration services provider.

Across all funds, Levine Leichtman has so far this year undertaken seven new platform deals and 29 add-ons, some of which are in the process of closing. The latter include LMM III’s debut investment, which will be announced shortly, Frankel and Weinberg said.

LMM III marks the first full-cycle fundraising by Levine Leichtman since last year’s succession. The event saw Arthur Levine and Lauren Leichtman, the husband-and-wife team who founded the firm in 1984, step back from day-to-day operations.

Those daily duties fell to Frankel and Weinberg, who were promoted to managing partner. The founders continue to provide guidance as co-chairs of the executive committee, a new body created with the succession, and the investment committee.

Succession-related changes, which included additional promotions, “put an organization established [38] years ago on course for the next 15 years,” Weinberg previously told Buyouts.

Levine Leichtman maintained a consistent deal pace throughout 2020’s virus-roiled market and is expected to do the same in the post-covid-19 recovery. “We will be firing on all cylinders,” Frankel said.

Update: An older quote used in this story has been updated to reflect that the firm was established 38 years ago.