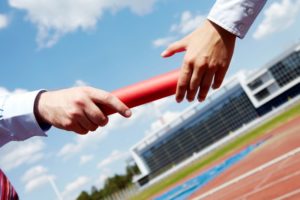 Levine Leichtman Capital Partners, which last year raised $2.5 billion for a sixth flagship fund, in July announced it had implemented a succession plan.

The event saw Arthur Levine and Lauren Leichtman, the husband-and-wife team who founded LLCP in 1984, step back from daily operations, and Matthew Frankel and Michael Weinberg become managing partners.

Frankel and Weinberg spoke with Buyouts about the succession and how it prepared one of the market’s oldest private equity firms for the future. They also discussed LLCP’s long-standing structured equity strategy and its active deal pace during the health crisis.

What were the key elements of LLCP’s succession plan?

MW: Two words we use at LLCP to express what we’re doing are “continuity” and “development.” Those words guided our succession plan. Our co-founders will continue to play a key role, providing strategic direction as co-chairs of the executive committee, a new body created with the succession, and the investment committee. Day-to-day management is now my and Matt’s responsibility.

These changes, along with the promotions of Stephen Hogan, Andrew Schwartz, David Wolmer and others, created new depth in our team and leadership. They put an organization established 36 years ago on course for the next 15 years.

MF: The succession was formally launched about 18 months ago; however, planning for leadership transitions has been going on at LLCP since the beginning. It’s part of our culture. The co-founders have been delegating over time. This approach made the major changes easier to manage.

MW: In addition, our succession planning was not done behind a shroud of secrecy. The process was transparent and engaged our limited partners throughout. This helped ensure no issues emerged when the firm was raising its sixth fund.

Was priority given to bringing junior team members up through the ranks?

MF: While promotions were part of the succession, it’s important to note that LLCP regularly promotes team members. This is also a feature of our culture. Promotions, in our view, are required to retain talent. Team diversity is another priority, something we learned from Lauren Leichtman, a pioneering woman general partner.

MW: We learned from our co-founders about the responsibility that leadership has to provide promotional paths. As our junior people demonstrate skills and development, as a matter of course they need to be rewarded with more senior roles.

MF: Sharing in ownership is a piece of this. The succession plan included making senior members of the leadership team part owners of the management company. Over the next five to 10 years, this avenue will also be available to other LLCP personnel.

How does the firm’s structured equity strategy differ from others?

MF: LLCP pioneered structured equity investing in mid-market companies and 36 years later there aren’t other PE firms doing exactly what we do.

MW: The term “structured equity” sometimes sounds like we’re offering a lending product. That’s not the case. Uniquely, LLCP is interested in control situations, using a combination of debt and equity capital in deals and sharing the equity position with our partners in management.

It is significant that we don’t over-leverage investments. We use less third-party debt than traditional buyout firms and almost never use preferred equity. This allows management to operate and grow their businesses without the risk or burden of servicing high levels of third-party leverage.

MF: We see management like the engine of a car. So, it’s important to structure deals in a way that aligns us with owner-operators and makes sure they are able to retain or increase ownership. For many mid-market companies, that makes LLCP preferable as a partner compared to a traditional buyout firm.

MW: Another aspect of our approach is targeting sectors that have attractive characteristics, such as resiliency and high cash generation. They include business services, education and engineered products and franchising.

How has the strategy evolved? Will it change going forward?

MF: There will be no fundamental shift in the strategy. We’ve developed our own style over time and it has worked for us. LLCP successively raised larger funds and to this day has never missed a monthly distribution to our limited partners.

The strategy has evolved. Fifteen to 20 years ago, the debt portion of our structured equity investments was greater than the equity portion. We have since skewed to equity as part of taking majority control stakes. This improved performance.

LLCP also added to the strategy by expanding our fund families. We developed a lower mid-market fund series to deliver the strategy to smaller companies than those backed by our flagships. In addition, we began investing outside of North America by developing a European fund series.

MW: Our limited partners encouraged us to extend the strategy into Europe. The plan was to replicate our success in North America, in part by gradually opening European regional offices for deal origination just as we did in the US. Today, we have offices in Los Angeles, New York, Chicago, Charlotte, Miami, London, Stockholm and The Hague.

How has LLCP fared during the health crisis?

MW: Covid-19 has had little to no impact on us, mostly due to our focus on minimal leverage. Other PE firms that rely heavily on debt are today facing challenges, with many in talks with banks about obtaining relief. That’s not our situation.

MF: Overall, the portfolio has held up relatively well, in part because there are no big fights over debt. Everyone can instead concentrate on long-term value creation. Our businesses are also in durable, non-cyclical sectors. In fact, some companies were positively impacted by covid-19, such as those in the healthcare space.

LLCP remains active in the market. We’ve closed three new platform investments since March (ESOP administration specialist Blue Ridge, e-learning solutions provider SiPM, and injection devices maker UltiMed) and will soon close a fourth. We’ve also done six add-ons to date, with another three expected in the next 30 days. As we don’t over-leverage, our deals are less affected by disruption in capital markets. We can continue to invest undeterred.

MW: We’re experiencing a reasonably large deal pipeline right now, which we expect to enable a consistent pace going forward. LLCP believes the businesses we’re backing will have significant tailwinds when the economy recovers and begins to grow.