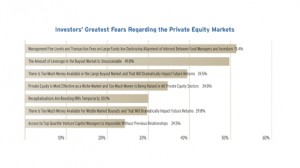 Recent heady returns and record fundraising aside, investors in buyout funds take a markedly skeptical view of the industry and its potential for maintaining success, according to a survey conducted by , the San Francisco placement agency.

Only 2.5 percent of respondents, culled from funds of funds, family offices, pension plans and other institutional investors, believe buyout fund returns from vintage 2007 funds will exceed returns from 2006 funds. Meanwhile, 55 percent expect the same level of returns, while 42 percent expect lower returns, according to the survey, which was conducted in January and released in March.

Most investors expect the IRRs of top-quartile 2007 funds to range between 15 percent and 25 percent, regardless of the size of a limited partner’s investment. Investors believe the greatest returns will come from European mid-market buyout funds, with U.S. mid-market funds following not far behind. Megafunds placed third among buyout choices in the survey.

But more than any concerns about the level of returns in 2007, investors expressed their greatest fear over the manner with which general partners manage these funds, according to the survey. More than 51 percent of respondents said they are most troubled by the size and number of management and transaction fees that GPs assess, and LPs said they think the fees are destroying the alignment of interest between fund managers and investors. In a separate question, investors said they would agree to give GPs a bigger slice of carried interest in exchange for limited fees. Nearly half said GPs should return 100 percent of transaction fees to investors.