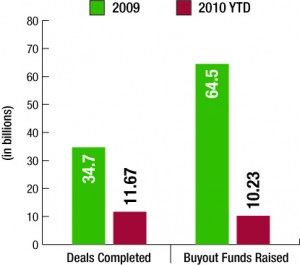 At the end of the first quarter, the commitments secured reached just $10.2 billion, way down from the $17.9 billion collected during the comparable period in 2009 and no where near the pace that saw firms raise more than $300 billion in 2007.

Energy Capital Partners also secured more commitments for Energy Capital Partners II, to reach $2.6 billion on the way to a $3.5 billion goal. The firm started marketing in December 2008, and the campaign is likely to close during the second quarter. The Short Hills, N.J.-based firm invests in renewable-energy plants, gas pipelines and other energy-infrastructure assets.

On the dealmaking side of the market, Thomson Reuters, publisher of Buyouts, tracked 147 LBO transactions during the first quarter of 2010. The 29 deals with disclosed financial terms had combined valuation of about $11.7 billion.

The quarter’s largest LBO deal was the purchase of IMS Health Inc. Affiliates of TPG and Canada Pension Plan Investment Board acquired the Norwalk, Conn.-based provider of prescription drug sales data for $5.2 billion in February. The deal had been in the works since November.