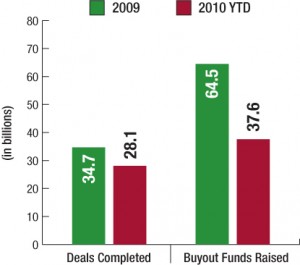 ’s affiliate credit completed the fundraising drive for at more than $3.25 billion. The original target was $2 billion.

Elsewhere, obtained $282 million from 82 investors for . The New York-based shop has a $400 million target for the vehicle.

On the deal-making side of the market, Thomson Reuters, publisher Buyouts, tracked 22 LBOs from July 1 through July 13. Six deals had known financial terms that added up to $3.4 billion, boosting our year-to-date deal volume to about $28.1 billion.

A couple of the most recent deals had 10-figure price tags. In the largest of these, and , along with a management-led investor group, acquired First Republic Bank of San Francisco for $1.86 billion.

, meanwhile, closed its acquisition of CKE Restaurants Inc. The deal has a rank value of more than $1 billion.