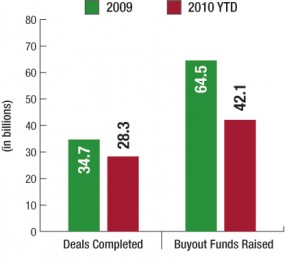 There was a surge of fundraising activity during the past two weeks, which brought the year-to-date tally to about $42.1 billion.

New York-based, which invests in financial services companies, also raised $475.6 million for . Forty investors contributed to the vehicle, according to a Securities and Exchange filing. The fund’s target is $2 billion.

Dallas-based held another interim close for at $1.1 billion, and the firm secured $1.6 billion for , according to Private Equity Insider.

The period’s largest deal was by ’s portfolio company Vision Solutions Inc. It acquired Double-Take Software Inc. The transaction has a rank value of $134.4 million. .’s Exopack Holdings Corp. affiliate was involved in another deal. It purchased some assets and liabilities from Bemis Co. for $81.2 million.