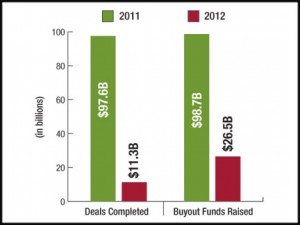 Year-over-year, there was growth in the amounts obtained by both buyout shops and mezzanine firms.  The mezzanine tally jumped to $3.7 billion from about $1.7 billion a year earlier. The group benefitted from The Blackstone Group LP’s GSO Capital Solutions Fund II at $4 billion. The vehicle had a $3 billion target.

Deal flow for U.S.-based financial sponsors lags behind the activities during the first quarter of 2011. Through March 21 this year, Thomson Reuters (the publisher of Buyouts) tracked 222 deals. The 33 with disclosed financial terms combined for $11.3 billion. For the comparable quarter a year earlier, the deal count was 253 and the disclosed valuation was $29.16 billion.

There have been four transactions with values greater than $1 billion so far in 2012. The largest transaction involved the merger of Hellman & Friedman LLC’s Datatel Inc. portfolio company with SunGard Data Systems Inc.’s SunGard Higher Education unit. The transaction had a rank value of about $1.78 billion.