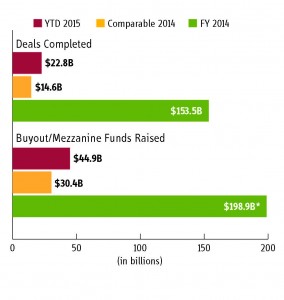 The Fortress Investment Group hit its towering target of $5 billion for Fortress Credit Opportunities Fund IV, its latest distressed credit-focused flagship vehicle. The fund has not officially closed, but it is believed the announcement is imminent. Another distressed-focused fund completed its fundraising over the last two weeks. Stabilis Capital Management’s fourth fund finished above its half billion dollar target at $540 million. Carrick Capital Partners is yet another firm that boosted the overall fundraising number by closing at $275 million for Carrick Capital Partners II LP, a high technology-focused buyouts fund.

Meantime, the deals completed total grew by almost a billion dollars since Buyouts last went to print. Of the deals that disclosed their value, two were larger than $100 million. Myers Industries Lawn & Garden Group was acquired by Wingate Partners for $115 million and Brookwood Financial Partners engaged in a commercial real estate deal for $113 million.