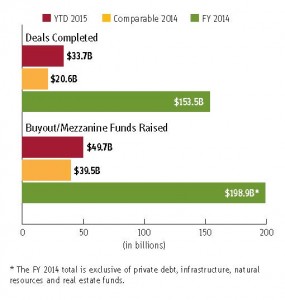 Leading the way in the deal-making spike was PetSmart Inc SPV, a special purpose acquisition vehicle formed by BC Partners Ltd, StepStone Group LLC, Caisse de Depot & Placement du Quebec of Canada and Longview Asset Management LLC, buying out all the common shares of retailer PetSmart Inc for about $8.8 billion. Other noteworthy deals were the acquisitions of Orica Ltd and Pioneer Corp. Orica, an Australian chemical business, was bought by the Blackstone Group for almost $654 million. The Japanese electronics producer, Pioneer, was acquired at the beginning of March by Kohlberg Kravis Roberts & Co for a little over $550 million.

The fundraising numbers grew at a relatively slower measure, and ‘only’ increased by about $5 billion since the last edition of Buyouts. HGGC, the middle-market focused firm that boasts NFL Hall of Famer Steve Young as one of its partners, surpassed its $1 billion target and closed HGGC Fund II at $1.33 billion. Another fund that punched above its weight was Linden Capital Partners III. The healthcare-focused buyout fund, originally targeting $600 million, closed at $750 million. Lastly, TPG Capital keeps progressing towards its ambitious $10 billion target on its seventh flagship fund. The firm has currently collected 65 percent of its goal.