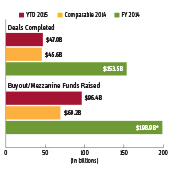 Another fund exceeding the billion dollar ceiling was Thoma Bravo’s distressed debt-focused Thoma Bravo Special Opportunities Fund II LP. It held a final close $65 million above its $1 billion target. Other mid-market vehicles that wrapped up their fundraising above target were Catalyst Investors and SFW Capital Partners. Catalyst Investors IV LP set out for $350 million and finished with $377 million, while SFW Capital Partners Fund II LP aimed for $325 and closed on $345. Leavitt Equity Partners entered the ring with its debut fund and has already received $75 million of its $100 million goal.

Meantime, the completed deals tally grew by nearly $5 billion since the last issue of Buyouts. Of the deals that were completed, just one carried a disclosed value. Centerbridge Partners acquired Senvion SE, a German manufacturer of wind turbines, in a leveraged buyout for just under $1.2 billion.