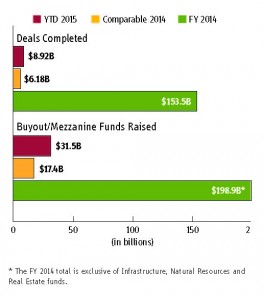 There were a number of marquee funds that wrapped up their fundraising over the past two weeks. Siris Capital’s third flagship fund, Siris Partners III, was wildly successful, finishing with $1.75 billion in commitments, a full $250 million above its hard cap. The New York-based firm will use the fund to target technology companies in the middle market. The Los Angeles County Employees Retirement Association was among investors, allocating $100 toward Siris Partners III.

The Raine Group also beat its target of $750 million – raising $850 million for its latest growth equity fund, Raine Partners II. Raine plans to focus on companies in the media and entertainment industry.

Yet another fund that did well was GoldPoint Partners’ fifth co-investment vehicle. It set out to raise $300, but finished with $675 million.

On the deal front, activity slowed in the last two weeks, but deal volume is still more than $2 billion ahead of last year’s pace. Among notable deals that took place, Starwood Capital Group, a Greenwich, Conn.-based private equity firm, used its global opportunities fund to acquire a Norwegian real estate investment company. The leveraged buyout was for a reported $1.5 billion.