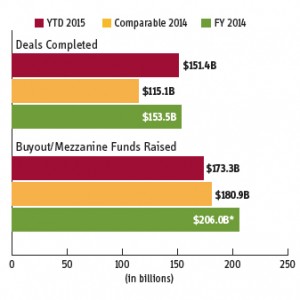 U.S.-based buyout and mezzanine fundraising grew by about $5.7 billion in the past two weeks, upping the yearly total to $173.3 billion. This marks the first time 2015’s total has fallen behind where it was at the same time last year.

Eaton Vance reported raising $3.6 billion for its growth equity-focused Beldore Capital Fund LLC.  Ridgemont Equity Partners announced the closing of its second flagship fund on $995 million, ahead of its $900 million target. Goldpoint Partners also exceeded its goal for its fourth mezzanine vehicle, closing on $505 million, well above its $300 million target.

A cavalcade of other firms are expected to start fundraising. After multi-year hiatuses, both Leonard Green & Co and Berkshire Partners will be hitting the fundraising trail. Leonard Green is looking to collect $7.5 billion for Green Equity Investors VII, while Berkshire Fund IX has set its aim for $5.5 billion. On a smaller scale, Waud Capital Partners and Mason Wells are both commencing with Fund IVs. Waud Capital Partners IV will look to raise $750 million, and Mason Wells Buyout Fund IV will pursue $550 million.

In the past two weeks, the completed deals aggregate rose by almost a full $3 billion. Of the deals with disclosed values that took place, e-commerce giant eBay was involved in the top deal. It sold its enterprise unit for $925 million to Sterling Capital, Permira Advisors, Longview Asset Management and Innotrac Corp.