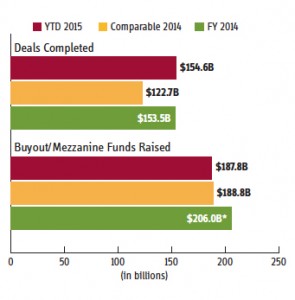 U.S.-based buyout and mezzanine fundraising had a huge two-week stretch, seeing its yearly total skyrocket by about $14.5 billion. This brings the 2015 total to $187.8 billion, about $1 billion short of where it was at this time last year.

Warburg Pincus did the heavy lifting, closing on a colossal $12 billion for its 12th flagship fund, Warburg Pincus Private Equity XII. The Audax Group wrapped up its fifth private equity fund at $2.25 billion, exceeding the $1.75 it originally set out for. Aethon Energy Management announced the closing of its sophomore fund at $240 million, ahead of its $200 million target. Aethon II will be aimed at onshore oil and gas assets.

A pair of debut funds finished collecting commitments since Buyouts last went to press. Tritium Partners, looking for $250 million for its inaugural fund, ended up hitting its hard cap of $309 million for Tritium I LP. Anchorage, Alaska-based Pt Capital finalized its maiden fund at $125 million. Pt Arctic Fund I will target investments in Alaska, Canada, Greenland and Iceland.

In the past two weeks, the aggregate total for completed deals grew by about $3.2 billion.

Of the deals with disclosed values that took place, the largest involved a London-based real estate development firm. Quintain Estates & Development PLC was bought by Bailey Acquisition Ltd, a unit of Lone Star Funds, for $1.43 billion. Another notable deal was Encana Corp selling its Haynesville shale properties to GSO Capital Partners, the credit arm of the Blackstone Group, for $850 million.

Download the Market at a Glance spreadsheet: Market At A Glance numbers_12072015