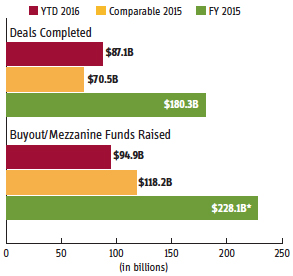 U.S.-based buyout and mezzanine fundraising padded its total by about $6 billion over the past two weeks, bringing the yearly aggregate to $94.9 billion. The total, however, still sits nearly $23 billion — around 20 percent — below this time in 2015.

Arbor Investments closed a pair of funds for a combined $875 million. Arbor Investments IV soared 25 percent above the $600 million target, closing on $750 million. Its first mezzanine vehicle, Arbor Debt Opportunities Fund I, wrapped up with $125 million.

A pair of shops launched their maiden vessels onto the private equity waters. H&F Polaris Partners released its self-titled debut and has thus far collected $300 million. MedMen, a firm focused on harvesting the legal marijuana industry, is seeking $100 million for MedMen Opportunity Fund.

Dealmaking was tepid, adding only $2.7 billion to its year-to-date sum of $87.1 billion.

An investor group of Ivanhoe Cambridge and Callahan Capital Properties acquired the entirety of Manhattan’s 1211 Avenue of the Americas office building from Beacon Capital Partners for $913 million.

Cision US Inc, owned by GTCR, bought out PR Newswire Association LLC, a provider of online news and information distribution services, from United Business Media PLC. The deal was valued at $841 million. 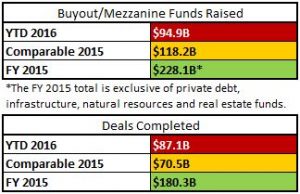