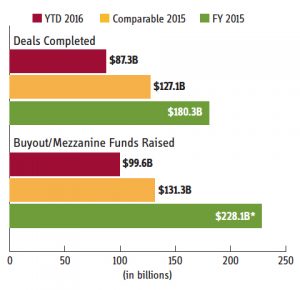 U.S.-based buyout and mezzanine fundraising climbed about $4.7 billion over the past two weeks, bringing the yearly aggregate to $99.6 billion. The total now sits $31.7 billion — or around 24 percent — below this time in 2015.

A cadre of funds reached the end of their fundraisings. Kelso & Co shut the door on Kelso Investment Associates IX at $2.56 billion after contributing $625 million to the fund. Triguard Management closed Montauk Triguard Fund VII 10 percent over the $600 million target, securing $660 million in commitments.

Perella Weinberg Partners Capital Management reentered the fray, releasing PWP Growth Equity Fund II with a $600 million aim. For the first time, Amulet Capital Partners put a fund out in the market. Its self-titled debut fund is seeking $250 million and has already assembled $145 million in commitments.

Deal-making wilted, adding only a bit more than $200 million in the past two weeks to bring its year-to-date sum to $87.3 billion.

Only three deals disclosed their values in the time frame.

Marlin Equity Partners bought the marketing-applications business of Teradata Corp for $90 million. And Kurt Salmon, a management consultant, sold off its healthcare division to ECG Management Consultants — a unit of Gryphon Investors — for $12 million.