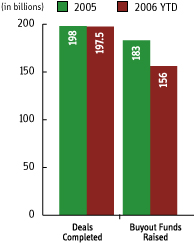 Domsetic buyout firms deployed nearly $2 billion in disclosed capital over the past two weeks, sending the year-to-date deal volume total up to $197.48 billion–all but ensuring 2006’s place as the third record-breaking year in a row.

Further adding to the market’s bravado in the past two weeks was Kohlberg Kravis Robert’s & Co.’s (ultimately unsuccessful) talks with Videndi SA about a possible $50 billion buyout of the media and telecom company, as well as speculation in the press that buyout firms are kicking around the idea of a massive take-private of Sprint Nextel to the tune of more than $75 billion. Meanwhile, deals that recently have closed include The Blackstone Group’s $887 million buyout of Encore Medical Corp and the $460 million acquisition of Egypt-based Amoun Pharmaceuticals by Citigroup Venture Capital, Capital International and Concord International.

Looking ahead, tech buyout funds ought to be all the rage early next year. In this issue, Buyouts reveals what it dug up on which of the big tech-only shops will be ringing LPs in the coming months. Otherwise, no multi-billion-dollar news over the last couple weeks, as the fundraising total inched up a mere $1.1 billion to $156 billion for U.S.-based buyout and mezzanine funds. Arsenal Capital Partners closed its Arsenal Capital Partners II, a $500 million fund, while AIG Capital Partners said it will raise €500 million for its second New Europe Fund. CalPERS committed another $1 billion dollars to the asset class, half to KKR’s latest initiative and half to venture fund-of-funds player Sacramento Equity Partners. Frontenac, meanwhile, is raising $450 million for its ninth investment vehicle and North Castle Partners said it would raise up to $300 million for its fourth fund, having already obtained $63.8 million of it.