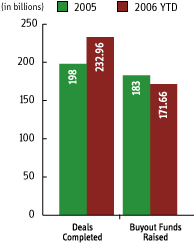 It’s official: 2006 takes the cake as the frothiest year in LBO history, leaving last year tens of billions of dollars behind. Thanks largely to the recent closing of Bain Capital’s, KKR’s and Merrill Lynch Global Private Equity’s $33 billion take-private of hospital operator HCA Inc., this year’s U.S. deal volume total now stands at a monumental $232.96 billion. For perspective, at this time last year, Buyouts had tracked about $155 billion in disclosed deal volume, while the full-year total topped off at a then-record-breaking $198 billion.

Not to be outdone, however, 2007 already has a strong deal lineup—including The Blackstone Group’s $36 billion buyout of Equity Office Properties Trust—threatening to dethrone the current year.

Meanwhile, in fund news, Bain Capital has been making splashes, as it is rumored to have already drawn down more than 50% of the $10 billion in equity it raised earlier this year. This past spring, the Boston-based firm closed an $8 billion general fund and a $2 billion co-investment vehicle that are already steward to companies like Dunkin Donuts, Burlington Coat Factory, HCA and Michaels Stores. This represents an increase in deal pace for Bain, whose last fund, a $4.25 billion vehicle, was tapped out after just 21 months. Meanwhile, on the fundraising front, Hellman & Friedman has secured $2.7 billion in commitments for its sixth fund, which has a target of $8 billion, and 3i Group closed its €5 billion fifth fund, which will focus mostly on mid-market opportunities in Europe. The year-to-date fundraising total for U.S. buyout and mezz shops as tracked by Buyouts now stands at $171.66 billion.