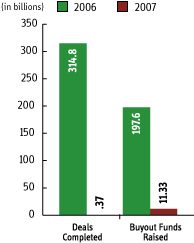 Deal flow in 2007 has started off at a strong clip, although the disclosure of deal values leaves something to be desired—at least from our editorial staff’s point of view. Of the dozens of closed deals that Buyouts has tracked so far this year, U.S.-based sponsors have only disclosed a mere $371.7 million in valuations. Exits, too, have started to pour in, as over the past two weeks buyout shops CCMP Capital (f.k.a. JPMorgan Partners), Candover Investments and 3i Group hatched a deal to sell energy equipment provider Vetco Gray to GE’s oil and gas division for $1.9 billion.

In other deal news, Heartland Industrial Partners and CSFB Private Equity sold automotive parts maker Metaldyne Corp. to Japan’s Asahi Tec Corp. in a transaction valued at $1.2 billion, while clothier The Gap Inc. (NYSE:GPS) may be setting itself up to be one of the next mega buyout targets, as it reportedly has retained Goldman Sachs to explore strategic options. The clothing retailer’s current market value is around $16.2 billion.

In fundraising news, U.S.-based firms have already collected approximately $11.33 billion in commitments from limited partners. Among the larger fund closes in the past two weeks: Goldman Sachs topped off its $6.5 billion GS Infrastructure Partners I LP, which started off as a $3 billion targeted vehicle; Citigroup Capital Partners II took in $3.3 billion in commitments; and energy-focused Quantum Energy Partners closed its fourth fund with $1.32 billion. Meanwhile, there’s a whole slew of funds already in the market, or scheduled to be later this year, that Buyouts is tracking. A list of some of these funds can be found on page TKTK. Happy hunting.