U.S.-based buyout and mezzanine fundraising skyrocketed in the past two weeks, thanks to one fund in particular.

Most of that total came from Blackstone Group’s latest flagship, which made its first close at $22 billion. The fund is Blackstone’s largest, and though there is no target, it is expected to surpass Apollo’s ninth fund, which closed on $24.6 billion in 2017 as the largest ever.

Fisher Lynch Capital contributed to the total with its fourth co-investment vehicle, which raised more than $753 million.

Bregal Partners closed its sophomore fund on $650 million. The firm focuses on companies in consumer and multiunit, food and beverage and business services.

Dealmaking added $11.1 billion to the YTD 2019 total – nearly double the amount added in the previous issue of Buyouts. It still trails 2018 YTD by $6 billion. Two deals crossed the billion-dollar mark.

The largest deal was Commscope’s acquisition of Arris International. Commscope, a unit of Carlyle Group, paid $7.4 billion for the wireless communications equipment manufacturer.

Second was Thoma Bravo’s acquisition of Ellie Mae for $3.2 billion. Ellie Mae is a developer of mortgage management software. 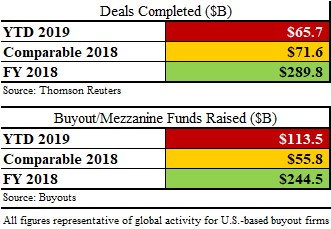