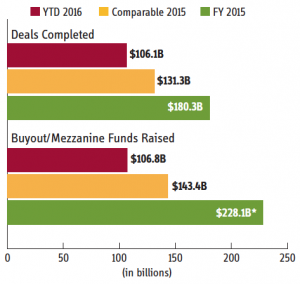 U.S.-based buyout and mezzanine fund-raising piled more than $5 billion onto its 2016 total since Buyouts last went to press. The total now sits nearly $36.6 billion —or around 26 percent— below this time last year.

Stone Point Capital reentered the market with Trident VII. Its seventh flagship is aiming for $4.5 billion and focuses on the financial industry.

CenterOak Partners beat its $350 million target and closed its debut fund at the $420 million hard cap. CenterOak is a spinout of Brazos Private Equity Partners.

Deal-making caught up to fund-raising, with the year-to-date total ballooning to $106.1 billion. The aggregate sits about $25 billion behind 2015’s deal pace. Value was disclosed for 13 deals in the surge, with two surpassing the $1 billion mark. 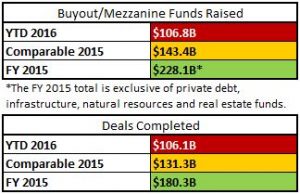