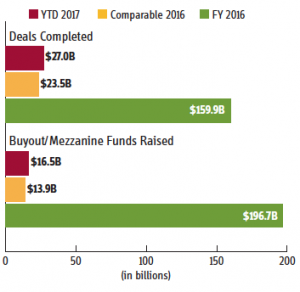 Over the past two weeks, U.S.-based buyout and mezzanine fundraising added $6.1 billion. The total sits at $16.5 billion and is ahead of this time last year by $2.6 billion, or 18.7 percent.

Great Hill Partners saw high demand for its sixth flagship fund. In just four months and without a placement agent, Great Hill wrapped up Fund VI at its $1.5 billion hard cap. Bregal Sagemount also hit the hard cap on its latest vehicle: Its sophomore fund surpassed the $800 million target and settled at $960 million.

Huron Capital Partners received plenty of attention for its fifth fund. The lower-middle-market specialist had more than $1 billion in demand, but stayed disciplined on size and closed Fund V with $550 million in commitments.

Deal-making saw a deluge of activity, ballooning by $19.9 billion in the past two weeks. The year-to-date figure is $27 billion, outpacing 2016’s total at this time by $3.5 billion, or 14.9 percent. Of the deals with disclosed value, three cleared the $1 billion hurdle.

Next up was Energy Capital Partners and Dynegy making a $3.3 billion deal for the thermal assets of electric utility services provider Engie SA. Right behind was Carlyle Group. Through two of its funds, Carlyle bought out Atotech, a Berlin provider of metal coating and surfacing services, for $3.2 billion. 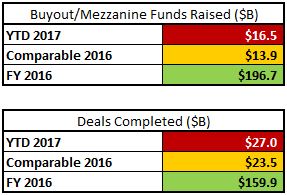