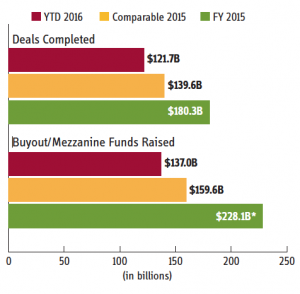 The Riverside Company also wrapped up Riverside Micro-Cap Fund IV on its hard cap of $650 million. Align Capital Partners hit the $325 million hard cap on its debut fund, which will be focused on manufacturing and business services.

Deal-making continued to build at a solid pace. Over the last two weeks, the year-to-date closed deals total grew by $4.9 billion, climbing to $121.7 billion. This year’s aggregate sits $17.9 billion behind 2015’s deal efforts – or 12.8 percent lower.

Two deals eclipsed the billion dollar threshold. First, Apollo Global Management again had the largest deal of those with disclosed value. The New York firm acquired Outerwall Inc, a provider of automated retail solutions, for almost $1.5 billion. Following was Polycom Inc, a communications equipment manufacturer based in the heart of Silicon Valley, which was acquired by Siris Partners for $1.2 billion. 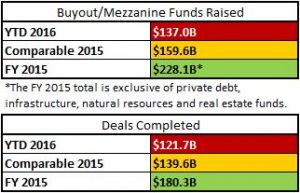