Buyouts
Home News and Analysis Firms & Funds Market at a glance – fundraising and deal making both healthily ahead...
Research 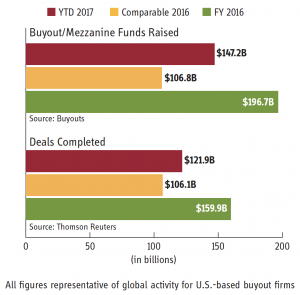 U.S.-based buyout and mezzanine fundraising added $6.3 billion since Buyouts last went to press. Thus far in 2017, $147.2 billion has been raised, leading this point last year by $40.4 billion, or 38 percent.

Quantum Energy Partners heads for the $4.5 billion hard cap on its seventh fund. Quantum Energy Fund VII is set to have compiled $4 billion through August.

Finishing high above its aim, CapitalSpring wrapped up its fifth vehicle at $725 million. CapitalSpring Investment Partners V originally set a target of $500 million and will focus on the branded restaurant industry.

True Green Capital Management hit the $350 million hard cap and finalized its third fund. As the name suggests, True Green invests in clean alternative energy, with an emphasis on photovoltaic solar in the commercial market.

Of deals with disclosed value, a quartet cleared the billion-dollar hurdle.

The largest of the four was for inVentiv Health Inc. Avista Capital Holdings acquired the healthcare and pharmaceutical consulting firm for just under $4.3 billion.

Golden Gate Capital and GIC Pte completed a deal for NeuStar Inc, a provider of real-time information and analytics, for $2.7 billion.

The final of the four deals was done by GI Partners. The Connecticut firm acquired ViaWest Inc, a data processor and host, for nearly $1.7  billion. 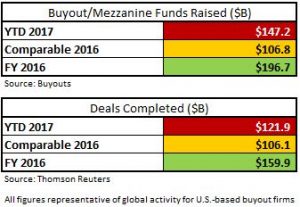