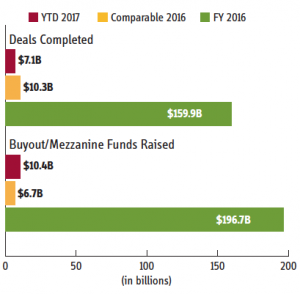 U.S.-based buyout and mezzanine fundraising added $9 billion to its yearly total over the past two weeks. That total now sits at $10.4 billion and is ahead of the year-earlier period by $3.7 billion, or 55 percent.

Deal-making wasn’t as lively, adding $2.2 billion to its yearly total since Buyouts last went to press. The year-to-date figure is $7.1 billion — or 31 percent behind a year earlier. Of the deals with disclosed value, only one hit the $1 billion plateau.

Blackstone Group acquired the share capital of the U.K. branch of OMV Ltd, a producer of crude petroleum and natural gas, for about $1 billion.

Booz Allen Hamilton Holding, a unit of Carlyle Group, bought out eGov Holdings, a digital-solutions provider for the government, for $250 million.

Blackstone was also involved in a $120.5 million real estate deal. It purchased 26 industrial assets of MStar Europe, a Paris-based lessor of non-residential buildings. 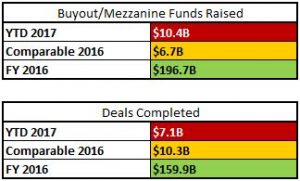