It has been a stellar year for U.S.-based buyout and mezzanine fundraising, which added another $7 billion to its year-to-date total since the last issue of Buyouts. Firms this year have now amassed $245.6 billion, which eclipses 2018’s year-end total, with three full months of fundraising still to go.

A big reason for this year’s impressive total is Blackstone Group, which has raised the largest private equity vehicle in history. The firm added another $4 billion to its eighth flagship to close the fund at $26 billion, edging out the previous record-largest fund, Apollo Global Management’s ninth flagship that raised $24.7 billion in 2017.

Advent International helped add to the fundraising total with its Advent Global Technology fund, which closed on its hard cap of $2 billion. The fund will be a tech-focused companion to its flagship, which closed on $17.5 billion earlier this year.

OpenGate Capital Partners pulled in the third most, raising $447.5 million of a targeted $450 million for its sophomore fund. Buyouts reported that the fund is expected to close on $550 million later this year.

New York-based Enhanced Healthcare Partners closed on $300 million for its latest fund, the third that EHP’s partners have led together. Kirkland and Ellis LP served as legal counsel for the fund.

Dealmaking continues to lag. Since the last issue of Buyouts, it added $4.7 billion to its year-to-date total, which now stands at $123.5 billion.

The largest deal belonged to Apollo, which acquired the entire share capital of Shutterfly Inc for $2.6 billion. Apollo bought out the provider of photofinishing services through a vehicle named Photo Holdings LLC. 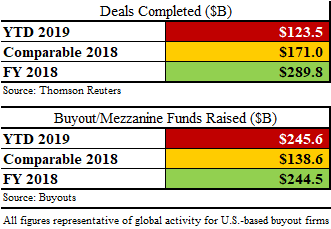