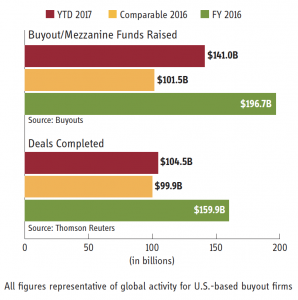 U.S.-based buyout and mezzanine fundraising slowed over the past two weeks, raising $3.8 billion. Thus far in 2017, $141 billion has been raised, leading the year-earlier period by $39.5 billion, or 39 percent.

Brentwood Associates went beyond the $750 million goal for its latest fund. Brentwood’s Fund VI closed on about $1.2 billion and will make buyout, growth equity and minority recap investments in the North American middle-market.

Not far behind, Fundamental Advisors wrapped up its third vehicle. Fund III focuses on critical community assets and raised $993 million in capital commitments.

Across the pond, Summit Partners hit the hard cap and finalized its second Europe Growth Equity Fund. Summit collected 700 million euros ($806.9 million) and will go after companies with 20 million to 60 million euros in equity.

Of deals with disclosed value, a pair rose above the billion-dollar mark, with one megadeal bringing in a lot of dough.

An investor group of JAB BV and BDT Capital Partners acquired Panera Bread. The chain of bakeries and cafes sold for nearly $7.5 billion.

HK Holdings, a unit of KKR, acquired the entire share capital of Hitachi Koki. The maker of power-driven hand tools went for more than $1.3 billion. 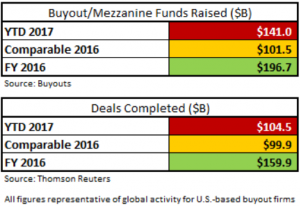