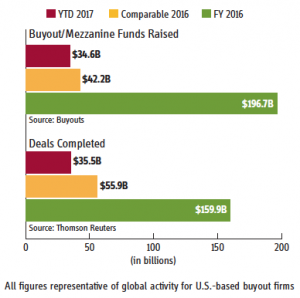 U.S.-based buyout and mezzanine fundraising stayed strong since Buyouts last went to press, adding $8.1 billion to its yearly total. So far, $34.6 billion has been raised this year; the total trails this time in 2016 by $7.6 billion, or 18 percent.

Värde Partners wrapped up its 12th flagship, set up to support value-based and credit-oriented investments. Värde Fund XII closed on more than $1.7 billion in commitments.

May River Capital’s inaugural fundraise lasted six months and concluded with $165 million the firm will use on lower-middle-market investments in the industrial sector.

Of the deals with disclosed value, the largest was for the non-operated assets of SM Energy in Eagle Ford, Texas. The gas-exploration assets were bought by Kohlberg Kravis Roberts and Venado Oil & Gas for $800 million.