Platinum Equity led the recent charge. The firm, founded by Tom Gores, raised an additional $2.2 billion to its fifth fund, which has now amassed more than $9.3 billion. The fund had a target of $8 billion after its initial close, according to an SEC filing, but now has a target of $10 billion.

Energy Capital Partners raised the second most. The firm brought in another $901 million to its fourth fund, which now has $2.7 billion of a targeted $6 billion. The firm focuses on North American energy-infrastructure assets.

Carlyle was a close third, bringing in another $846.6 million to close its fifth European fund at $7.1 billion (6.4 billion euros).

L Catterton Growth was not far behind for its fourth growth equity fund, which raised $445.8 million. The fund targets $625 million.

Dealmaking continues to trudge along to the finish line, adding $1.7 billion since the last issue of Buyouts. The year-to-date total now stands at $151.8 billion.

The largest deal was SK Capital Partner’s acquisition of PolyOne Corp, a manufacturer of plastics materials, for $775 million.

The second largest was Yellow Wood Partners’ acquisition of Dr. Scholl’s from Bayer AG for $585 million. 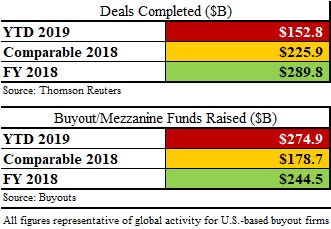